Diamond Jim’s real name was James Brocatto. He was the owner of one of New Orleans finest restaurants, La Louisiane. A man who regularly walked with mobsters, politicians, call girls, show girls, movie stars and moguls. You could find him mingling on a daily basis with some of American famous icons including the Yankee Clipper, Joe DiMaggio, and his bride, the woman every man wanted, Marilyn Monroe, as well as movie stars including Robert Taylor and Barbara Stanwyck.

But his real claim to fame was the diamond jewelry that he wore both during the day and at night. 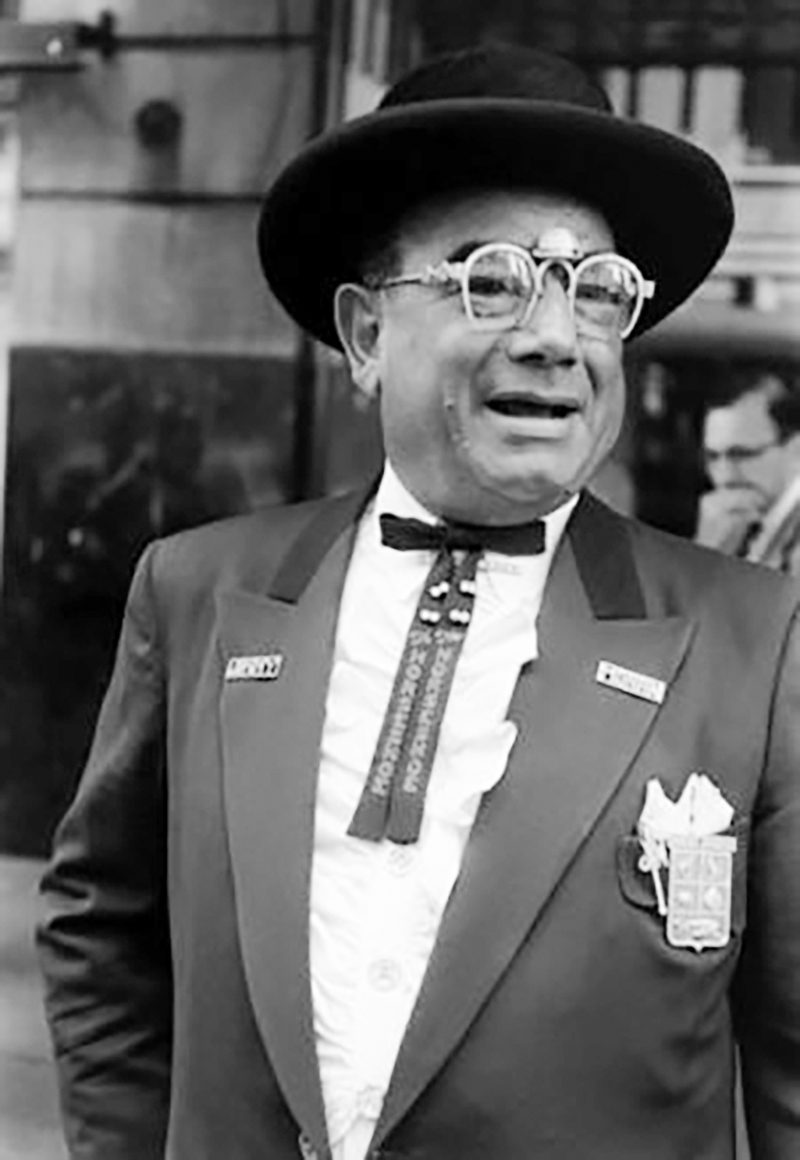 Diamond Jim Moran is said to have been wearing a quarter of a million dollars in jewelry the night he died of a heart attack at his restaurant La Louisiane.

They say Moran was a made member of the mob but he also owned and managed some of the best eating establishments in New Orleans such as the La Louisiane where he served diamonds in meatballs in the French Quarter.

Dinner at the La Louisiane not only included finding diamonds in the meatballs but famous mobsters like Meyer Lansky and Lucky Luciano could be your next door table guests a swell.

On Sunday’s one could find Diamond Jim in the sacristy of St. Mary’s Italian Church siting and taking communion with mob big wigs like Charlie Lucky Luciano and Frank Costello.

Diamond Jim was a made man and would be seen in church with (L) Frank Costello and (R) Lucky Luciano when they were in New Orleans.

Or be seen driving his Corvette convertible in the French Quarter with heavyweight champion Rocky Marciano.

Heavyweight Champion Rocky Marciano (center of table) would often dine in one of Diamond Jim’s restaurants then be seen riding in Moran’s Corvette convertible in the French Quarter.

Once, Diamond Jim was even paid $50,000 just to make a showing at the Kentucky Derby while the Duke and Duchess of Windsor were paid only $10,000 for the same outing.

New Orleans restaurateur known as Diamond Jim Moran gets his diamond-studded toupee adjusted by a beautician before taking off for the Kentucky Derby. He was reportedly paid $ 50,000 just to make an appearance.

So who was this legendary man? Moran was only seven years old when he had to hit the streets of the French Quarter, shining shoes. He would eventually become an amateur prizefighter to earn a few extra bucks picking up his name from a boxing buddy named Pal Moran. Jimmy Brocato became prize fighter Jimmy Moran.

Moran parlayed his shoeshine money and boxing earnings, along with cash from a few other hustles he was doing, into a barbershop on Howard Avenue in New Orleans. Up to this time it had been pretty much a hand-to-mouth existence for Moran. Then a man with a familiar face sat in his barber chair one day. The two became fast friends. Moran’s customer was none other than Huey P. Long, the Kingfish himself. (Louisiana U.S. Senator) 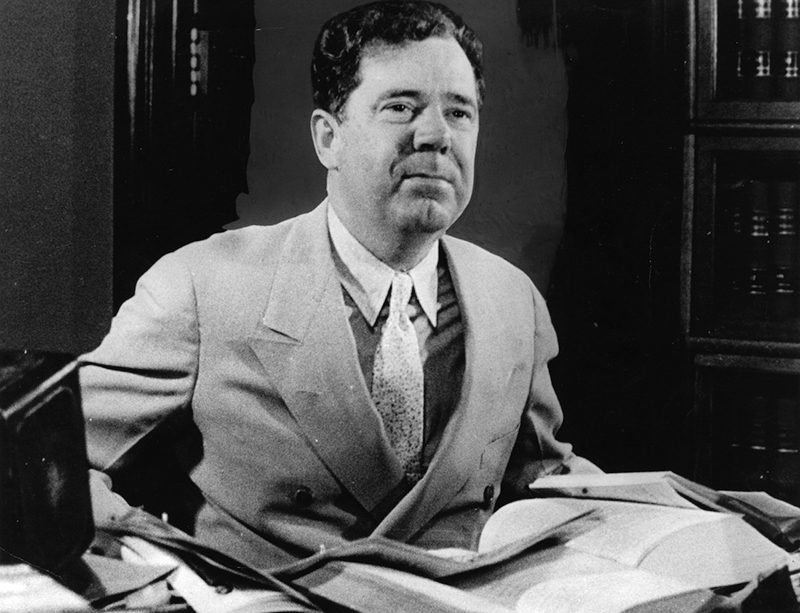 Diamond Jim and the Kingfish were life long friends. In fact if was Diamond Jim that foiled the first assassination attempt on the Louisiana Senator.

As a U.S. Senator, the radical populist Long was constantly butting heads with President Franklin Delano Roosevelt. When word got out that a drunken Long was partying above the Ming Toy restaurant at an illegal speakeasy. The place was busted, and Moran was arrested for violation of the Volstead Act [prohibition] while a drunken Long was hustled down the fire escape by his body guards and wound up sleeping it off in his bed across the street at the Roosevelt Hotel.

Moran did six months of a three-year sentence, kept his mouth shut and gained his release, because he was a model prisoner. Besides, the big fish had gotten away and Moran was considered small potatoes.

Senator Long never forgot that. When Moran was coming home to New Orleans from his Atlanta prison, he was wearing a seersucker suit. It was in the middle of the winter, terribly cold and raining. The conductor told Moran he was going to be let off at the Carrollton Station instead of the regular stop. When Moran got off the train, a big black limo pulled up, a guy jumped out and opened the door and inside sat Senator Huey P. Long. He said, Welcome home, Jimmy! The senator took off his big overcoat and wrapped it around Moran and ordered the driver to take them to a welcome home party at the Roosevelt. 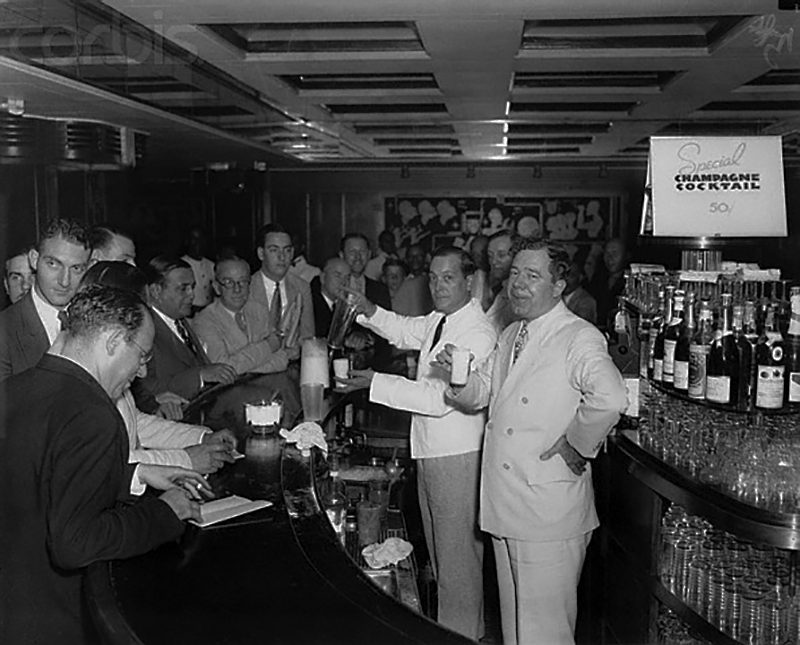 As Long’s political fortunes grew, so too did Moran’s bankroll. In time he opened the Ming Toy, a Chinese restaurant on Elks Place across from the then Roosevelt Hotel, the New Orleans headquarters of Long. Years later, then New Orleans Police Chief, George Reyes would say, the order to raid the Ming Toy didn’t come from police headquarters. It came from Washington.

One night a friend of Moran’s in New York, got a tip and warned him that Senator Long is going to be assassinated at the Roosevelt Hotel. The men who are going to do it are planning it right now at 811 St. Louis Street they said. Moran passed this information along to Senator Long, who had his bodyguards go to that address. When they got there, they didn’t find the men, but they found an arsenal of weapons and enough information that pointed to a hit. Senator Long thanked Diamond Jim and told him, tell your friend in New York thanks. And tell him I owe him one.

The friend was Frank Costello, the man personally picked to move slot machines into the Greater New Orleans area. The favor Costello performed for U.S. Sen. Huey P. Long was duly paid off. The slot machines rolled into New Orleans and became as prevalent in juke joints and restaurants around town as video poker machines are today. Everybody was paid off: cops, judges and politicians all got a cut. 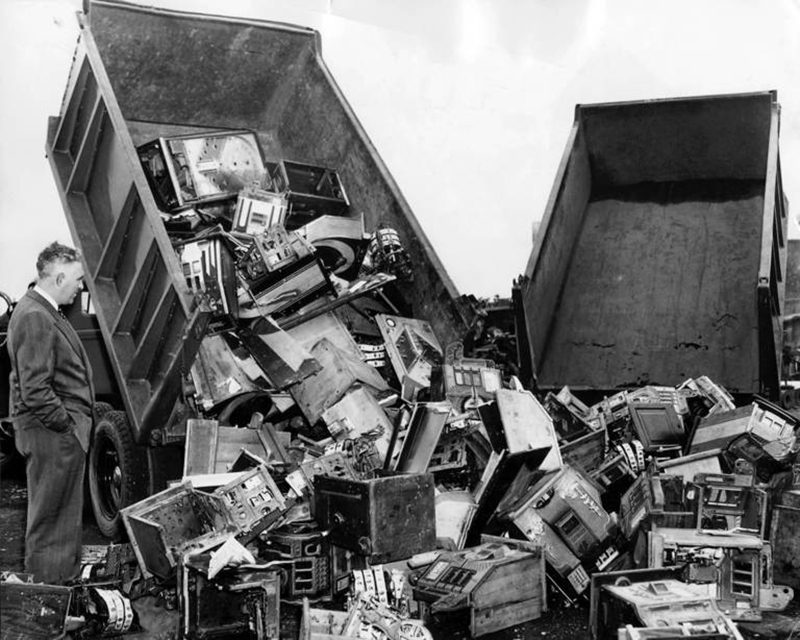 Every once in awhile, a police captain or a politician would call a press conference, and with axe in hand, would wade into a sea of confiscated Indian Chiefs

Those that were too worn out would be tossed off the stern of a boat to the depths of the Mississippi off Algiers Point all to the orchestrated clicking of news cameras. Before the machines hit the bottom of the river, they had been replaced by new machines being cranked out, and were fleecing suckers all over the city. Not a coin was lost. 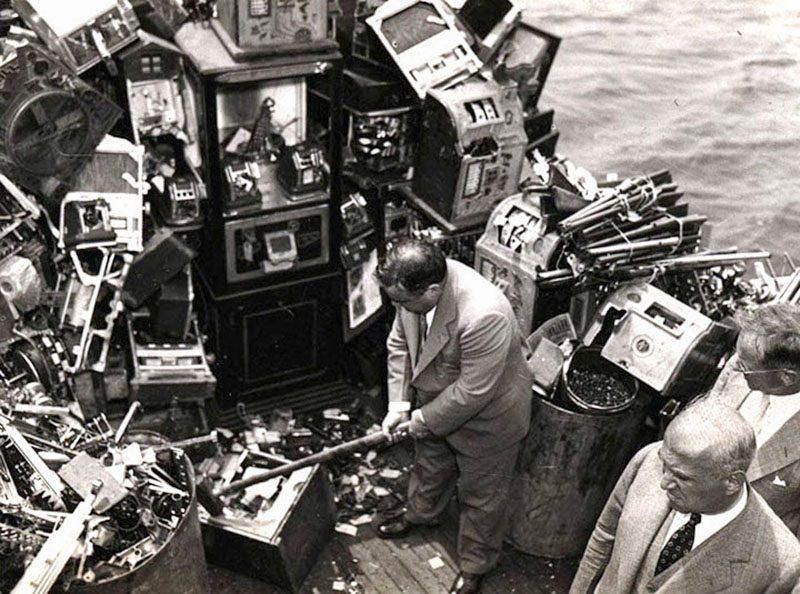 Old worn out slots were dumped into the Mississippi River as photos captured what looked like the police doing their job.

Guys like Luciano when they weren’t partying at the restaurant, it was an Italian feast at Moran’s camp at Little Woods on Lake Pontchartrain. The camp was especially convenient to guys like Luciano, Costello, Dandy Phil Kastel, Milwaukee Phil Alderisio and Meyer Lansky the financial wizard of the mob, 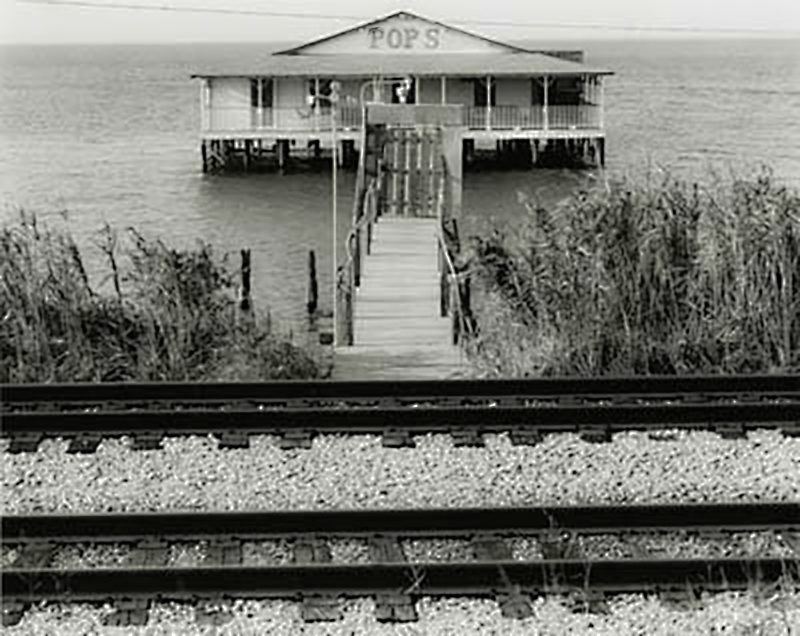 Mobsters could fly in on seaplane, party and hobnob with Moran at the Lake Wood camp on Lake Pontchartrain then head back to their home bases around the country without anybody ever knowing they had been here

After Moran died in 1958, it’s said that many in Louisiana cried including shoeshine boys and bouncers in the French Quarter, longshoremen on the docks, and Moran’s long time friends Gov. and Mrs. Earl K. Long.

There was shock around the country.

Entertainer Jimmy Durante wept and said, Geez, I’ll never go back to New Orleans. There’s no reason to go back now that my pal, Jimmy, is gone 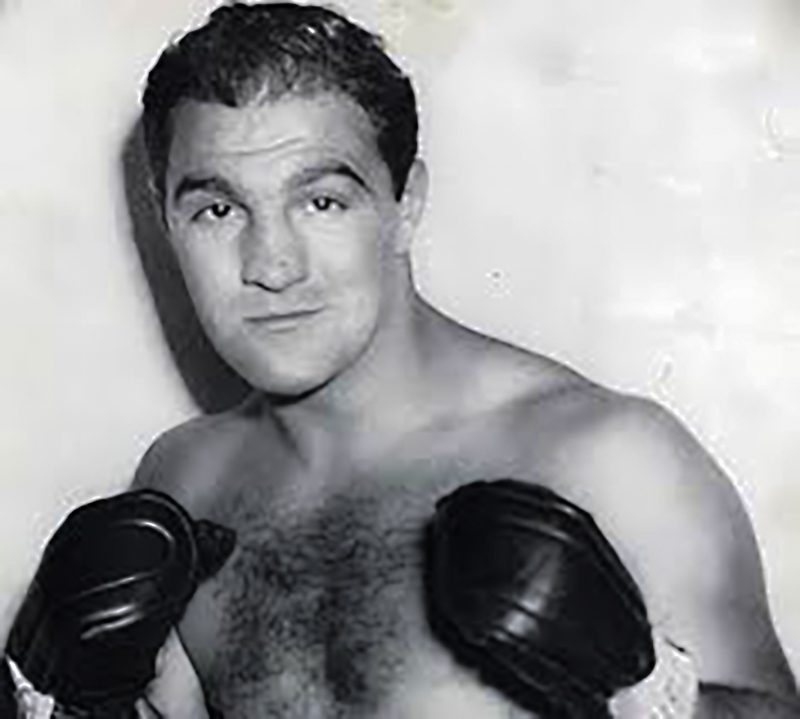 I’ll miss Diamond Jim and his love for boxing. I can’t believe he’s gone. The world will never be the same. 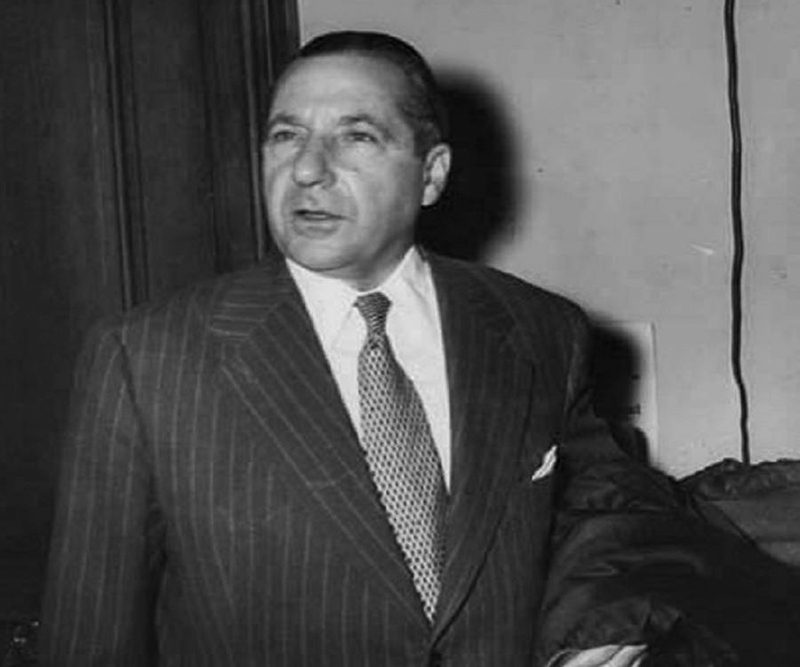 Frank Costello let a lot of mob business run unattended as he mourned his friend Moran.

Frank Costello let a lot of mob business run unattended as he mourned his friend, Moran.

Even powerful Senator Estes Kefauver who dogged the mob and many of Moran’s friends, including Costello, during his televised Kefauver Committee hearings into mob activities during the 1950s said, 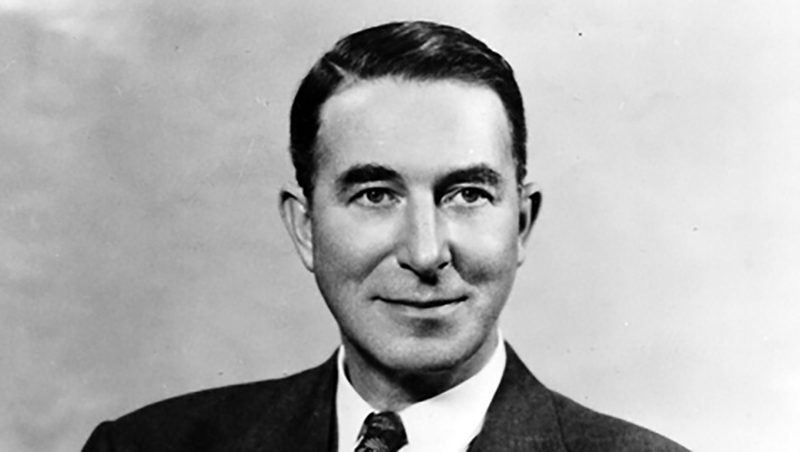 Jim represented the American dream. He was truly a gem of all the people and my dear friend.

A good guy who handed out dollars like they were dimes to Depression-era families.
The legend of Diamond Jim Moran endures up until the very minute he died of a heart attack in his restaurant in 1958. Who else dies decked out in an estimated quarter of a million dollars in jewels.