“Landslide Lyndon.” This title cast a shadow over the political history of LBJ that he never does escape for the rest of his life. Everyone knows he’s a wheeler dealer. Winning with only 87 votes means there are skeletons in his closet.
-Senator Everett Dirksen of Illinois

The Agony of Defeat

In the 1941 run for the senate, Lyndon needs all the money George and Herman Brown will give him. This is a race that can only be described as combination of politics with a dash of old time Texas circus. Twenty-nine candidates are running for the same position. In the end, though, there’s only one person to beat: the Governor of Texas, W. Lee “Pappy” O’Daniel.

Pappy O’Daniel is a 1930’s radio personality. His band called the “Light Crust Doughboys” is very popular because of their hit song “Pass the Biscuits, Pappy.” Everyday throughout Texas, O’Daniel’s country music radio program broadcasts to a large, loyal following. 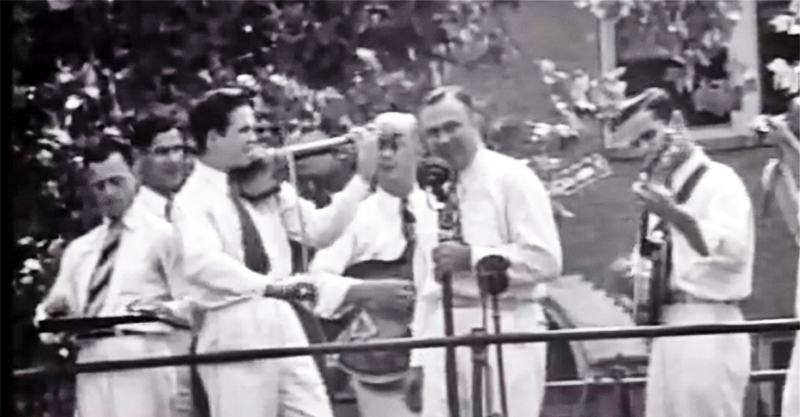 Texas Governor W. Lee “Pappy” O’Daniel and the Light Crust Doughboys perform at a campaign gathering in the 1941 Senate race against Lyndon Johnson. O’Daniel is declared the winner.

Lyndon Johnson campaigns hard to overcome O’Daniel’s popularity. He makes hundreds of speeches and tries to visit all the small towns in his district. He touts to his constituents that he is the new voice of real progress. By election time, Johnson is closing the gap by jumping on the bandwagon of FDR. By election night, he leads O’Daniel by roughly 5000 votes. The “Dallas News” on Sunday morning after the election declares that Johnson is the new U.S. Senator. Later that evening, however, Johnson gets a lesson he will never forget.

In south and east Texas, stuffing the ballot boxes is not unusual. Corruption is the norm, and it’s usually a political leader that decides how the county will vote. Sometimes it’s the sheriff; other times, it’s a county judge. It’s rarely ever the people. Saturday night, the night of the election, Lyndon Johnson’s campaign manager, John Connally, gets a telephone call with the winning returns. He is told to report the numbers to the O’Daniel team. He never imagines that by doing so he is telling the other side how many votes they have to come up with to win. By the time all the counties are counted, Johnson ends up losing by 1311 votes. Connally admits he made a huge mistake by letting the opposition know how many votes they were trailing by. O’Daniel’s team went out and rustled up just enough votes to turn defeat into victory. Later, Lyndon is asked if he wants to contest the election and decides that it’s best to wait. After all, his side has large amounts of money they haven’t disclosed, along with a few dark things they can bring to light in the next campaign. Johnson says “No, I’ll wait my turn, and when it comes, I’ll be the one fixing the ballots.”

LBJ campaigns hard in the 1941 race for the U.S. Senate but loses by 1311 votes to Texas Govenor “Pappy” O’Daniel, the only election LBJ ever loses in Texas.

Johnson is not prepared for defeat. He decides to stay out of politics for the time being. He buys a house, and his wife buys a small radio station in Austin. After 10 years of marriage, Lynda Bird, their first child is born. Three years later, they have another girl, Luci Baines, born in 1947. Johnson uses the LBJ initials on everything from his own children to the family dog, “Little Beagle Johnson.” Even his home is called the LBJ Ranch. The LBJ brand is on everything from cufflinks and ashtrays to clothes. Financially, he’s flying high. Politically, however, Johnson is miserable. 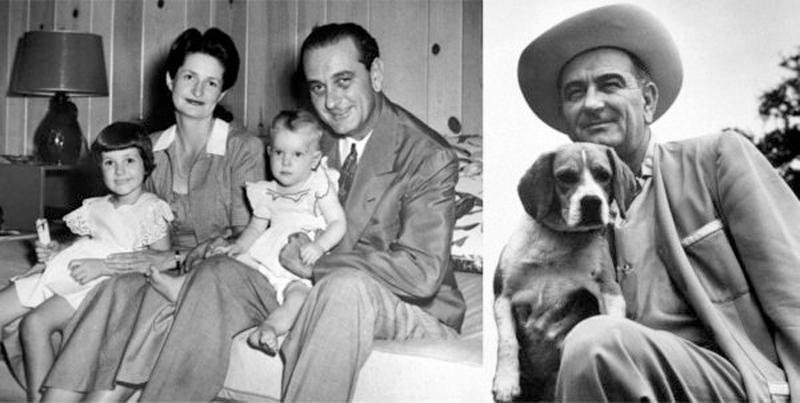 On December 10, 1941, while still serving in Congress, Johnson is called into active duty. He’s appointed a Lieutenant Commander and reports to the Office of the Chief of Naval Operations in Washington, D.C. His job is to inspect and report on shipyard facilities in Texas. In the spring of 1942, FDR sends Lyndon to report on conditions in the Southwest Pacific.

Assigned to the 22nd Bomb Group by General Douglas MacArthur, Johnson volunteers as an observer on an air strike against a Japanese air base in Lae, New Guinea. Coming under heavy fire, the mission loses U.S. planes with casualties. Official flight records, however, show that Johnson’s plane turns back with a generator problem and never sees any actual combat. MacArthur later awards Johnson the Silver Star for gallantry in action. Johnson is the only member of the crew to receive the decoration which is personally presented by General MacArthur along with this citation.

For gallantry in action in the vicinity of Port Moresby and Salamaula, New Guinea, on June 9, 1942. While on a mission of obtaining information in the Southwest Pacific area, Lieutenant Commander Johnson, in order to obtain personal knowledge of combat conditions, volunteered as an observer on a hazardous aerial combat mission over hostile positions in New Guinea. As our planes neared the target area they were intercepted by eight hostile fighters. When, at this time, the plane in which Lieutenant Commander Johnson was an observer, developed mechanical trouble and was forced to turn back alone, presenting a favorable target to the enemy fighters, he evidenced marked coolness in spite of the hazards involved. His gallant actions enabled him to obtain and return with valuable information.

Lt. Commander Lyndon Johnson volunteers for an airstrike mission on a Japanese air base near Lae, New Guinea. He later is awarded the Silver Star by General Douglas MacArthur, even though his plane sees no action.

Obviously, MacArthur’s decoration is politically motivated. New aircraft and more combat troops are sent immediately to MacArthur’s forces once Johnson gets back to Washington and delivers his report to FDR.

The 1948 US Senate Election

The 1948 senate campaign will haunt Johnson for the rest of his political life. This is another matchup with a sitting Texas governor. This time, his name is Coke Stevenson, a very popular self-made man. Throughout the state, Stevenson is known as “Mr. Texas.” This becomes a make or break election for LBJ. 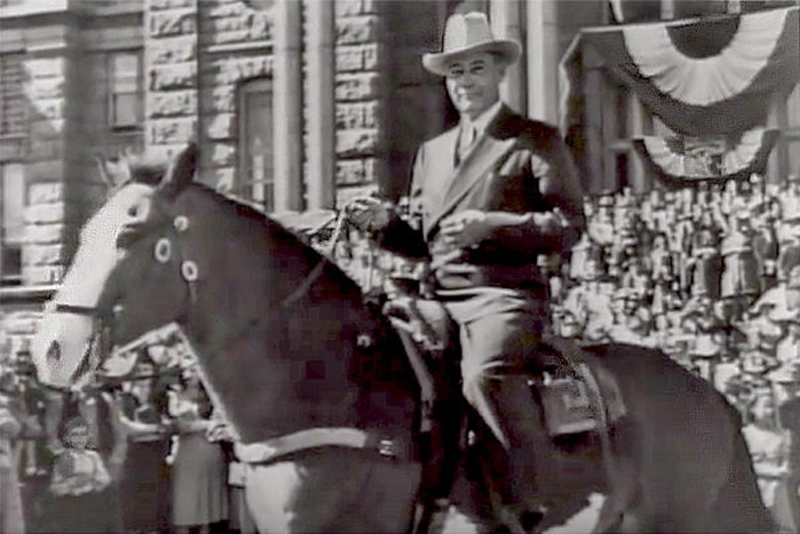 “Mister Texas” Governor Coke Stevenson runs against LBJ in the 1948 Senate race. Stevenson is the most popular candidate and is expected to win, but loses to “Landslide Lyndon” by fewer than 200 votes.

By 1948, Johnson is at the top of this game. During his campaign, he runs large political gatherings in carnival-like environments that include musical acts, comedians, and of course, his own speeches. He gives away savings bonds, watermelons and even puts on beer fests. Coke Stevenson, on the other hand, campaigns from town to town the old fashion way, by car caravan. Lyndon Johnson takes to the sky. In a five-week-long helicopter campaign, Johnson criss-crosses the state, making 370 landings – and losing 27 pounds in the process. In a single day, he speaks to 15,000 people. Many people in rural towns of Texas have never seen a helicopter. They laugh about it at the time, but will not miss it when it lands in their town. So naturally, the fairgrounds become a favorite landing spot for Johnson’s helicopter which is nicknamed “The Johnson City Windmill.” Sometimes, he flies over the crowd and announces over the megaphone, ”This is Lyndon Johnson, and I’m going to land in just a minute, and I want to shake the hand of everyone down there.”. He then tosses out his white Stetson cowboy hat into the crowd. Someone on Johnson’s ground team is assigned the task of going to the person who catches the hat and asking for it back. 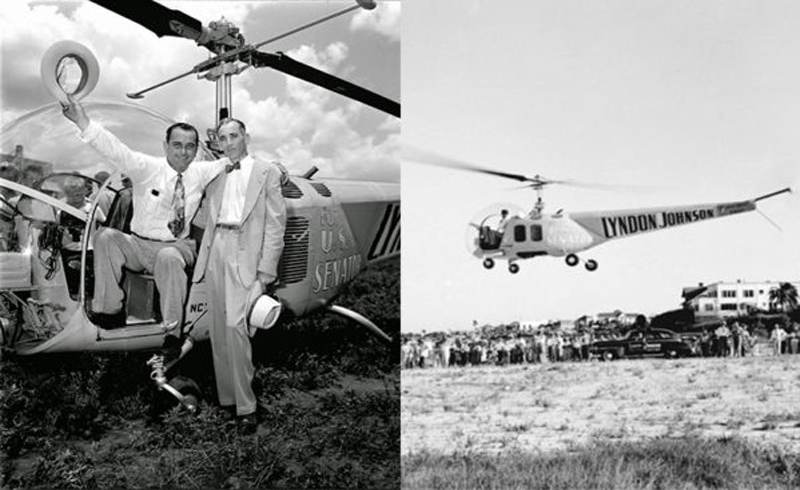 “Mister Texas” Governor Coke Stevenson runs against LBJ in the 1948 Senate race. Stevenson is the most popular candidate and is expected to win, but loses to “Landslide Lyndon” by fewer than 200 votes.

Once on stage, LBJ would say, “This is Lyndon Johnson, your congressman, how do you think things are running?” He then calls out the names of real people in the crowd and asks them how their business is running. Of course, everyone is taken by surprise when a congressman lands in a helicopter then calls out the names and businesses of local people in the crowd. From farmers to car dealers, the crowds love it. Johnson is the circus ringmaster and puts on a good show wherever he goes. 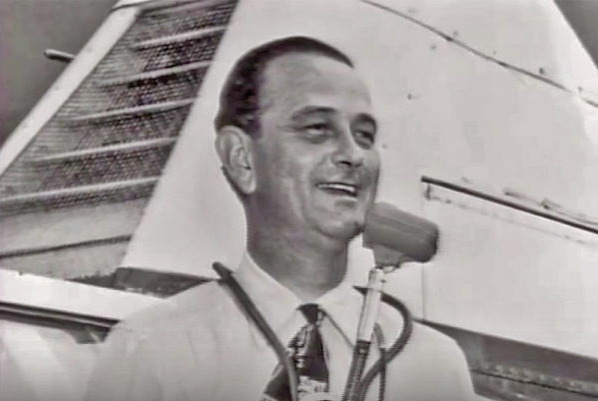 LBJ gives his usual folksy pitch on the campaign trail. “Howdy, I’m Lyndon Johnson. How do you think things are running in your hometown? I’m here to shake everybody’s hands and become your new U.S. Senator.”

Johnson begins his political life as an FDR liberal, but in 1948, Johnson runs against the unions, supports big business and speaks out against civil rights. The oil boom makes Texas conservative and wealthy. As Texas changes, so does Lyndon Johnson.

The race is so close that it is impossible to call. The lead goes back and forth. Lyndon tells John Connally that he thinks he is going to lose the election. Connally replies, “No I think this will be a reversal of the 1941 election.” Stevenson leads by just a few votes three days after the polls close, but the votes are still coming in. Stevenson is looking like he will be the new senator from Texas. But Johnson does not want to lose again and remembers the election of 1941.

The Duke of Duval county, George Parr, controls the county votes in South Texas. Six days after the polls close, in the tiny south Texas town of Alice, 202 additional votes are recorded from precinct box 13. All but 2 are for LBJ. When the signatures of the 202 are examined, they are all written in the same ink and are in alphabetical order. 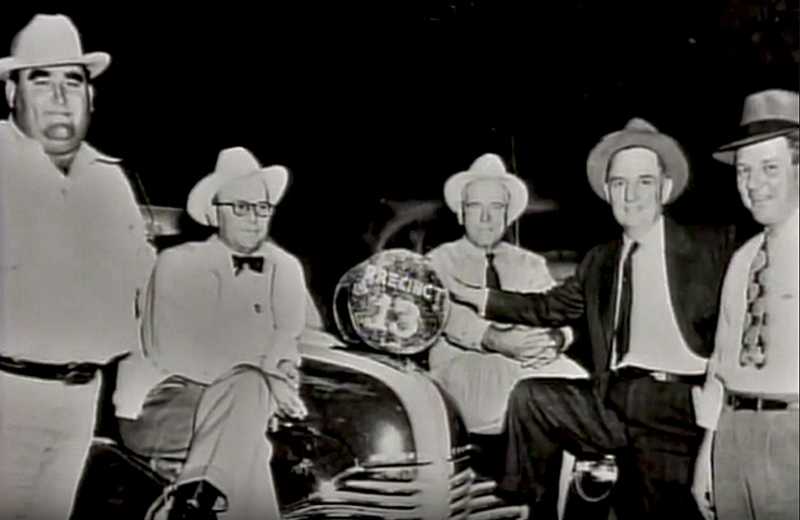 Stevenson disputes the election at the state Democratic convention, and the dispute goes all the way to the Supreme Court. Johnson is declared the winner by 87 votes.

It is 1949, and Texas has a new freshman Senator known as “Landslide Lyndon.” The Duval County incident is a blemish on LBJ’s political legitamacy that he never escapes from. Upon arriving in Washington to take his seat in the Senate, he is a powerless man in an institution run by insiders. So he turns to a man who knows just how the insider’s club is run. His name is Bobby Baker. 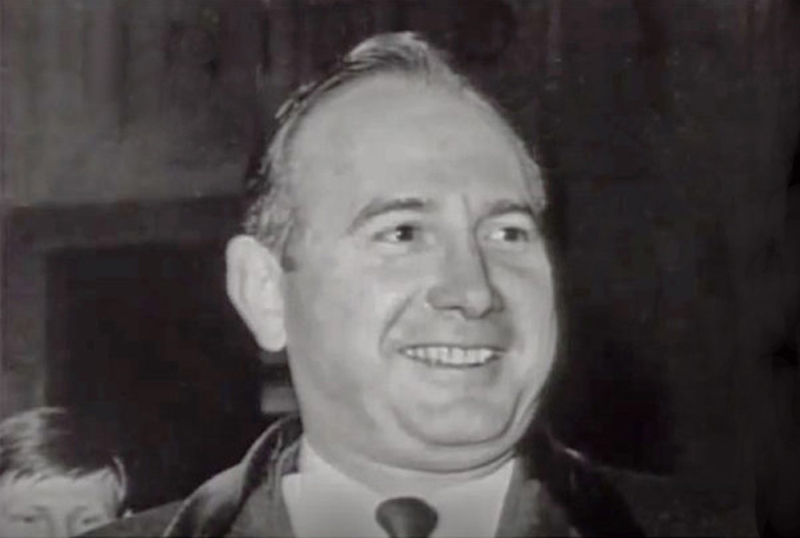 Bobby Baker is LBJ’s secretary. He is so powerful politically, he is known as “Little Lyndon.”

Baker comes to the senate as a page in the 1940s. Word gets around town that Bobby knows where all the bodies are buried. Lyndon calls Baker into his office and says “Mr. Baker, I’ve always wanted to meet you. My spies tell me you’re the smartest son-of-a-bench over there.” Baker replies, “That’s not true. The only reputation I have is that my word is my bond, and I will protect your privacy.” Johnson replies, “You’re the kind of man I want to know.”

Baker knows that Lyndon is committed to the oil interest of Texas. Johnson cozies up to the oil barons, attaches himself to the southern conservatives and is given the job of party whip.

LBJ changes the position of party whip to one of power. Two years later, LBJ is elected Democratic leader. Landslide Lyndon is now one of the most powerful men in the U.S. Senate.