He has been called a vulgar wheeler-dealer. He was generous, and he was selfish….he was kind and, other times, he was cruel. At times, he was a crude-acting fellow. At other times, he was incredibly charming. He could be whatever he wanted to be. He was a strange and complex man, almost a Jekyll and Hyde existence. He was two different people.
-John Connally- Texas Governor wounded with JFK in Dallas

Lyndon B. Johnson is born in Stonewall, Texas, on August 27, 1908. His father is Samuel Ealy Johnson, Jr., and his mother is Rebekah Baines Johnson.

Lyndon’s family comes from some of the first settlers of Texas. His early family tree includes, cattlemen, cotton farmers, Confederate soldiers and politicians. He is practically born into politics. His grandfather runs for office, and his father, Sam, is a State Legislator from the 89th District who serves five terms in the Texas Legislature as a Populist Democrat. One of his father’s early achievements is to preserve the Alamo as a part of the great heritage of Texas. Sam drafts the bill in the legislature that provides for the Alamo to be overseen and administered by the Daughters of the Texas Revolution.

At the age of 5, Lyndon and the Johnson family move from their farm to the town of Johnson City, Texas. By rural standards, the Johnsons have a middle-class home life. It is still, however, without electricity and indoor plumbing. Life is tough in the Hill Country of Texas, and it is especially tough for Lyndon’s mother, Rebekah, who is an ambitious college graduate from McKinney, Texas, near Dallas. She becomes the driving force that makes Lyndon into an over-achiever, to the point of being reckless later on in life. Under her tutelage, Lyndon is reading by the age of four. However, Rebekah is a strict disciplinarian, and many believe it is this lack of affection towards Lyndon when he doesn’t have high marks in school that makes him feel that he can only be loved if he is successful. Fear of failure becomes Lyndon’s worst nightmare.

“Someday, I’ll be President of the United States.”

At the age of 12, Lyndon tells his teacher and schoolmates that one day he will be President of the United States. It is in these early school years that Johnson is a talkative young boy with lots of ambition. By the 11th grade, he is president of his high school class in Johnson City, a 3-hour mule ride from his home. Then in 1927, at the age of 19, Lyndon is accepted to Texas State Teachers College in San Marcos, Texas.

Lyndon Johnson (upper center) poses with his students at Wellhausen School in Cotula, Texas, where he taught in 1928.

Lyndon has to work his way through school. For nine months in 1928, he takes a hiatus to teach Mexican-American students at Wellhausen School in Cotula, a small town south of San Antonio. He saves the money he earns to help pay for the remainder of his education. More importantly, the experience of working with impoverished children will impact the decisions he makes years later as he is shaping his ‘Great Society” agenda as President of the United States.

After completing college in 1930, Lyndon takes a job at Sam Houston High School in Houston. Then, with only a year of teaching school under his belt, Lyndon leaves education and enters politics. It is during these early years in politics that he refines his famous art of persuasion that becomes his famous and legendary trait.

LBJ’s first job is that of secretary to Senator Richard Kleberg. Mr. Kleberg represents the Corpus Christi, Texas, region, which is home to the famous King Ranch, of which Kleberg is part owner.

In 1931, Lyndon takes his first job in politics, working as secretary for Texas Senator Richard Kleberg.

In 1937, the 28-year-old LBJ campaigns on the coat-tails of FDR’s New Deal.
His message rings home to poor dirt farmers of central Texas. During his campaign, he gives over 200 speeches, ending up in the hospital on Election Day with appendicitis. He learns of his victory from the hospital bed. The 10th Congressional District elects Lyndon to a seat in Congress

In that same year, when FDR visits Galveston, the governor of Texas, James Allred, invites the newly elected congressman to meet the President. Learning quickly to always attach himself to power, LBJ quickly becomes friends with the man in the White House as he arrives in Galveston aboard the Presidential Yacht Potomac.

Upon arriving back in Washington, it is said that FDR commented to one of his aides “I meet a young guy from Texas who, if he plays his chips right and keeps the friends he meets, this boy named Lyndon Johnson can wind up being president of the United States. He’s got it.”

When LBJ arrives in Washington in 1937, the town is alive with the excitement of FDR’s New Deal. Here, he becomes further educated in political science with the help of Vice President John Nance Garner and Texas Congressman Sam Rayburn.

Arriving in town with his new wife, Lady Bird, LBJ sets up his office. Lady Bird proves to be the perfect political wife. She manages his office and cooks breakfast for his staff. She’s the perfect business manager for her very ambitious partner. With a big friend in the White House, LBJ works for improvements within his district. He secures millions of dollars in loans and government grants for rural electrification of the Texas Hill country. There are loans for farmers, plus spending on schools, roads and public libraries. 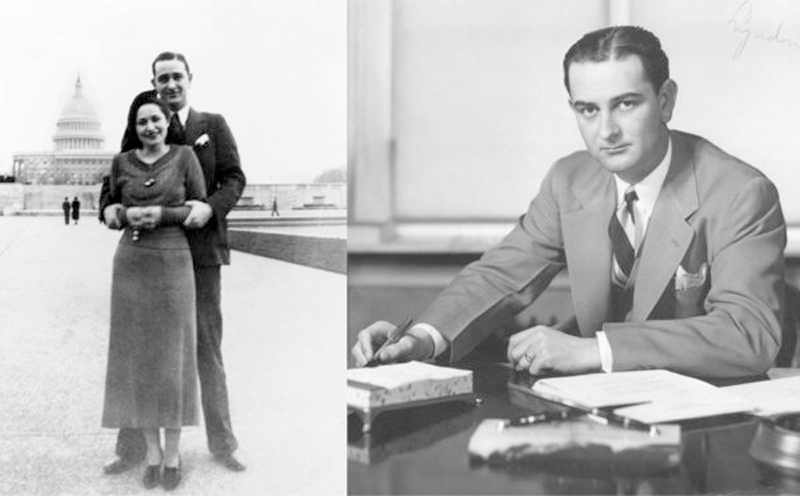 In 1938, rural Texans are still living without electricity and indoor plumbing. There is no refrigeration, so every meal has to be started from scratch. His greatest achievement in those early years is getting a dam constructed on the lower Colorado River. This is an achievement that every politician hopes for. The Hill Country farmers thank him for the electricity, and the builders of the dam thank him for the contract.

Suddenly, Texas “Good Ole’ Boys,” George and Herman Brown who support LBJ during his early political career, are awarded large government contracts. Johnson makes the Brown brothers billions of dollars, and in turn, they fund his every political need – and all of it is done with cash. No receipts and no paper trail.

On May 2, 1939, George Brown writes a letter to Lyndon “ I hope you know, Lyndon, of how I feel in reference for what you’ve done for me, and I’m going to show my appreciation through the years with actions rather than words.”

Two years later, the Brown brothers make good on their promise. These and other wealthy oil men and real estate developers would end up being the Power Brokers that help LBJ take control of Texas politics.