To call them the “main figures” is a gross understatement. The people involved in this story are iconic figures that have become bigger than life over the years. With the exception of Pilar, whose true identity is still somewhat a mystery, the names and faces of these people are now ingrained in our minds forever.

Pilar (last name unknown) was a beautiful young woman who emerged from the Cuban Revolution as one of the elite assassins Fidel Castro used to stay in power. Pilar was a shadowy figure who had served as a sniper during the revolution. After the war ended, she was sent to Russia for extensive training in espionage and political assassination. When she first came to the U.S. at the age of 21, she was well schooled in killing with guns, knives and poisons. She had the authority to kill at will. She was first sent to Washington, D.C., to gather intelligence on the government’s efforts to eliminate Castro. She took a job at Bobby Baker’s infamous Quorum Club, which Baker established with the blessings of Vice-President Lyndon Johnson for the purpose of spying on political figures in Washington. 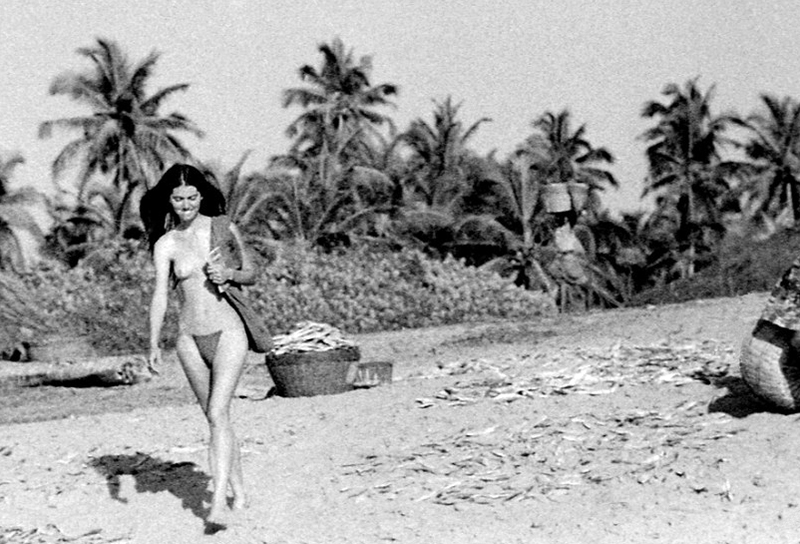 Pilar exposed? Possibly Pilar on a Cuban beach in 1960

Pilar and the other girls who worked at the club were in reality call girls who were there to service the sexual needs of club members. JFK was an honorary member of the club, and it was through this connection that he meets Pilar – for the second time. His first encounter with Pilar had come five years earlier in Havana, when Pilar was a 16-year-old virgin who had been forced into the sex trade by members the Santo Trafficante organization. JFK did not remember that encounter. But Pilar did. She vowed revenge at the time. And now she was about to get it.

John F. Kennedy, the 35th President of the United States, who was assassinated in Dallas on November 22, 1963, has become one of the most enduring historical figures of all times. He was possibly the most morally corrupt and reckless president in American history who came tragically close to bringing about a nuclear war that could have destroyed the United States and many other parts of the world. Given his playboy mentality and the frivolous attention he paid to his duties as President, one has to wonder what his standing would be today had he not been killed. His assassination is what he’s famous for, yet he gave us the Peace Corps, the Space Program and the Vietnam war. He promised to put a man on the moon and ruled over an administration whose love affair with assassination was held at bay by its incompetence to pull it off. Kennedy’s uncontrolled affairs with women were only outdone by his careless and dangerous relationships with gangsters such as Chicago crime boss Sam Giancana. He brought organized crime into the highests levels of our government. He might have given us the Civil Rights Act if he had lived, but probably not. He lacked the political skills of LBJ to get such monumental legislation through Congress. Saying that JFK was flawed is being too kind. He was addicted to drugs and sex, he objectified women and treated them like toys, and he was horny to the point of recklessness. On more than one occasion, he slipped away from the military aide carrying the briefcase with the nuclear code to have a quickie. Luckily, the nation never came under attack while he was banging one of his many paramours. And when he stopped off in Paris in May, 1961, on his way to Vienna to meet with Nikita Khrushchev after the Bay of Pigs fiasco, his priority was in hooking up with one of “Claude’s Girls,” a high-class call girl ring in Paris.

When JFK arrived in Vienna a few days later to meet with Khrushchev, he was ill prepared to face the adversarial Russian leader. Some say Kennedy was under the influence of methamphetamines provided by Dr. Max Jacobson (Dr. Feelgood), who had accompanied Kennedy on Air Force One. The meeting didn’t go well. In fact, it led to the building of the Berlin Wall, the nuclear arms race, and ultimately the Cuban Missile Crisis the following year. The Cuban Missile Crisis further strengthened Kennedy’s resolve to get rid of Fidel Castro, and that, more than any other single issue, may have led to JFK’s assassination.

Fidel Castro, was the revolutionary leader of Cuba. After overthrowing the illegitimate government of President Fulgencio Batista on January 1, 1959, Castro came to the U.S. seeking financial support. But he was spurned by President Dwight Eisenhower and rudely dismissed by Vice-President Richard Nixon as being a communist. Castro then turned to the Soviet Union for aid, and soon became dependent on the communist nation for financial aid and military assistance. Castro soon began nationalizing American corporations and seizing their assets, which angered both the U.S. government and corporate America. At the same time, Castro began kicking U.S. Mafia figures out of Cuba and closing their casinos, which infuriated the mob. In a matter of months, Castro became public enemy number one of the U.S. government, American corporations, American mobsters and disgruntled Cuban refugees. They all embarked on campaigns to kill Castro. The fact that he managed not only to stay alive, but to stay in power, from 1959 until his death at the age of 90 in 2016, is a testament not only to his survival skills, but also to the secret spy apparatus he created in Cuba. He did not wait to be killed. He took the initiative and killed his adversaries before they could kill him. 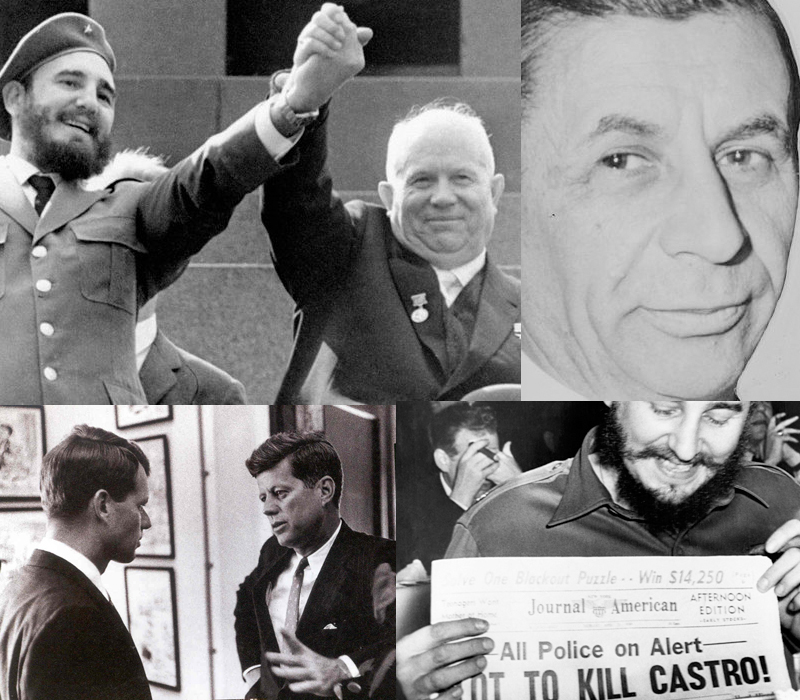 Jack Ruby was the only person involved who knew the real story of the assassination of JFK. On the surface, Ruby was a nightclub owner in Dallas. He is depicted as a small-time hustler and perennial loser involved in one failed venture after another, until he buys what will become the Carousel Club in downtown Dallas. He appeared to be marginally successful with the Carousel Club, but that was not his main line of work. In reality, Jack Ruby was a master spy who worked for the C.I.A., the Mafia and Fidel Castro at the same time. His true allegiance was to Castro, who had promised him one million dollars after his service was complete. Ruby first met Castro when he went to Cuba in the early 50s to begin running guns with a mobster friend from Chicago named Dave Yaras. Ruby solidified his relationship with Castro by selling him the handguns used in the Moncada Barracks attack on July 26, 1953. In 1956, Ruby helped Castro with more weapons used to invade Cuba and begin the revolution in earnest. At the same time, Ruby was working as a bag man for Carlos Marcello’s mob operations in Dallas. Ruby would use this connection to feed Castro information about the mob’s activities that might affect Castro’s security. When Castro turned communist and the C.I.A. started plotting against him, they turned to Ruby as a source of information. But Ruby double-crossed the C.I.A. and actually fed information to Castro. 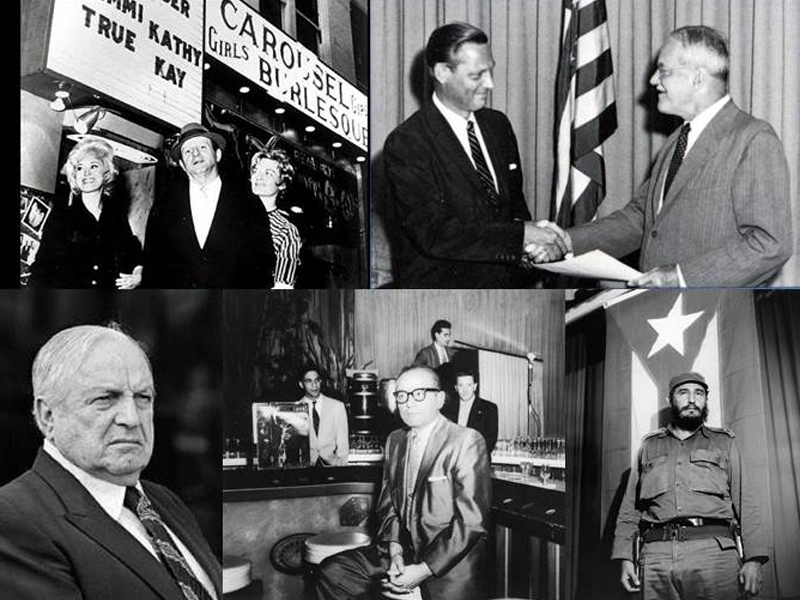 Jack Ruby was a triple-agent who spied for and against the CIA and the Mafia. He also was a spy for Castro, to whom he was loyal. Clockwise from upper left: Jack Ruby and friends; David Atlee Phillips and Allen Dulles of the CIA; Santo Trafficante Jr.; Carlos Marcello. 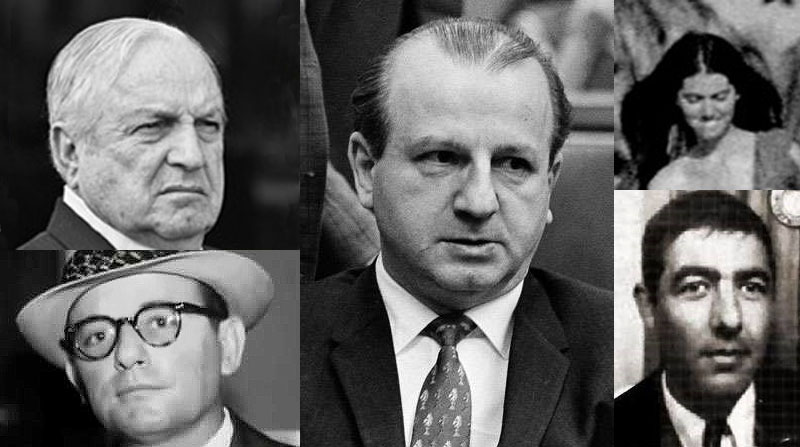 Lee Harvey Oswald is the guy they blamed for Kennedy’s assassination. He, in turn, was assassinated by Jack Ruby wasn the custody of the Dallas Police Department. Oswald was a naïve young man who claimed to be a Marxist supporting the regime of Fidel Castro’s communist regime in Cuba. Two years before JFK’s death, Oswald had defected to the Soviet Union where he met and married his Russian wife, Marina. The Warren Report concluded that Oswald acted alone in firing three shots at JFK, including the fatal shot that blew the president’s head off. This occurred while Oswald was firing a single-shot bolt-action rifle from the sixth floor of the Texas School Book Depository building at Kennedy’s open limousine which was traveling at 30 miles per hour down a tree-lined, sloping, curving street into the sun. That was quite a feat for a marksman like Oswald who six months earlier had shot at and missed General Edwin Walker who was sitting perfectly still in front of  a window in his home less than 200 feet away. One can only wonder how Oswald could have been so accurate when firing at a moving target 200 yards away and completely inaccurate when firing at a stationary target less than 200 feet away. Disbelief is the hallmark of the Kennedy assassination. 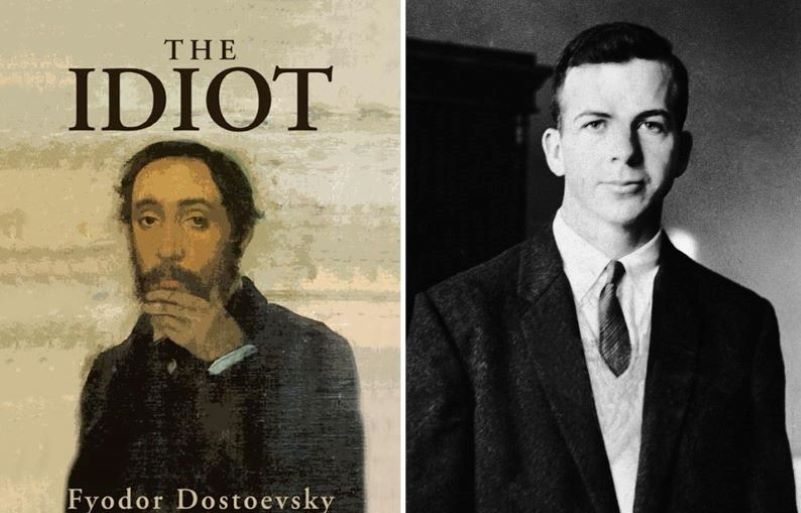 While Oswald is in Russia, his Intourist guide gives him a book for his birthday. It is very appropriately titled.