“It’s not what you are that counts, but what people think you are.”
– Joseph Kennedy

John Fitzgerald Kennedy (JFK) is born on May 29th, 1917, in Brookline, Massachusetts. 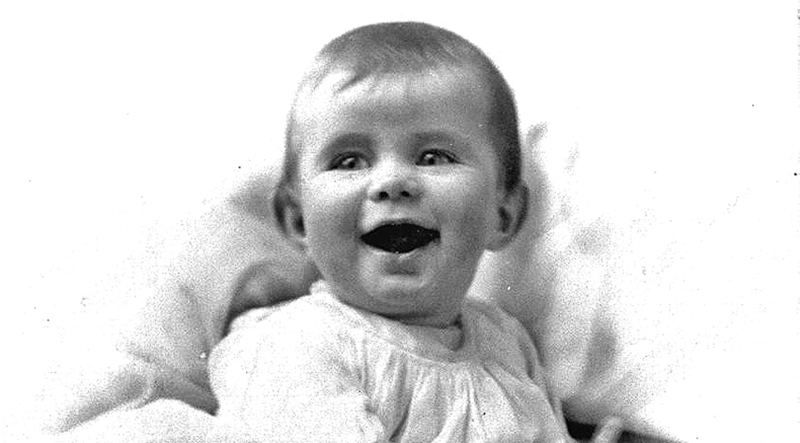 His parents are Joseph, Sr., and Rose Kennedy. They have a total of nine children, and John is the second oldest behind his brother, Joe, Jr. His younger brothers and sisters are Rosemary, Kathleen, Eunice, Patricia, Robert and Edward. These are the Kennedys that will become one America’s most famous and infamous political families. 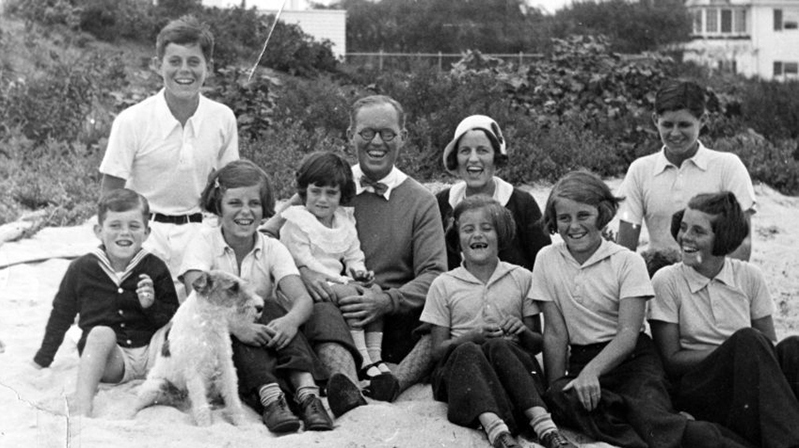 Early in life, JFK attends private school and lives a life of luxury, spending the summers in Hyannis Port and the winters in Palm Beach, Florida.

JFK attends classes at Choate, a boarding school in Connecticut, from 1931 to 1935. His academic performance is patchy as he applies himself only to the subjects he enjoys. He is a mixed-up student, a trickster, and is often in trouble with his teachers, parents, and school principals. Yet he stands out with his sharp intellect and appealing personality. “Muckers” is a secret club that JFK establishes with a small group of his most prankish classmates. The headmaster’s term for troublemakers is “muckers,” which the group adopts and wears as a badge of honor. 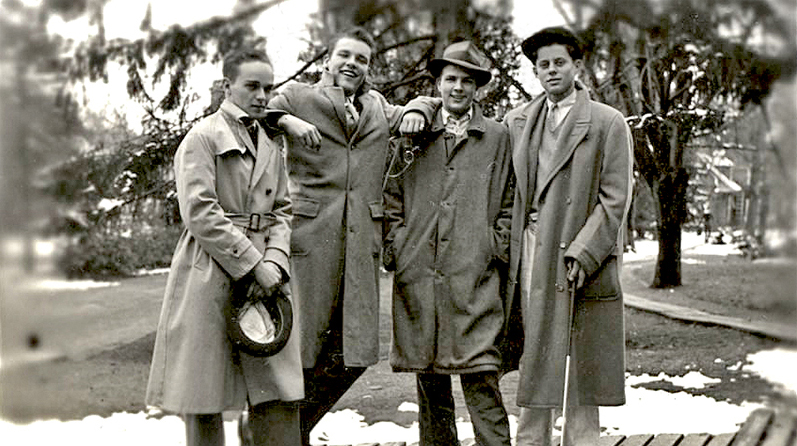 One of the Muckers’ plots stopped by the school headmaster is a plan to move a pile of horse manure into the school gym; the idea nearly gets the group expelled from school.

In the headmaster’s office, father and son listen to the error of Jack’s ways. Joe Kennedy is steady in his “complete” support of the school, agreeing that Jack is motivated by “childishness.” Jack is on very thin ice with the school, he is told.

But after the meeting and to Jack’s surprise, Joe tells Jack that, if it were his group, the name would start with the letter F. Joe conveys to his son several Kennedy traits at once: that he is proud of Jack’s leadership, and that his true shame is in getting caught. One had to toe the line in public and appear to be good. Joe often said, “It’s not what you are that counts, but what people think you are.”

One Taste of Sex, and He’s Hooked.

JFK has his first sexual experience at the age of 17, and after that he’s like a junkie hooked on sex. In 1934, his buddies take him to a house of ill repute in Harlem to help him lose his virginity. He becomes obsessed with sex from then on.

Jack then spends most of the year in hospitals with medical problems. He is sent to the Mayo clinic where doctors find colitis. Again in 1935, while attending Princeton, he suffers from a gastrointestinal problem and drops out of school.

Remarkably, doctors from the different hospitals and clinics where Jack is tested throughout his life never seem to examine his whole medical history, let alone his entire body. He is subjected to a number of unnecessary exploratory surgeries that take a toll on his lower spine. It’s not until he sees Dr. Janet Travell in 1955, that they get to the root of the problem: JFK was born with his left side slightly smaller than his right. This birth defect was the main cause of Kennedy’s back pain.

After spending most of his teenage years living in New York, Jack returns to Boston to attend Harvard University, his father and older brother’s alma mater.

In February 1935, while JFK is again in a Boston hospital, a nurse with the nickname of Bunny Day visits him, and they have intercourse in the bathtub. Meanwhile, in September he enrolls in Harvard and studies government. JFK is mostly a C-student during his first two years.His teachers would say, “He can do what he wants, but doesn’t waste time on what does not interest him.” In addition to his outside normal studies, he enjoys sports, as well.

Kennedy is the chairman of a party-planning committee during his freshman year. Officially, the group is known as the Smoker Committee, and its main job is organizing the annual class party in the spring. The one Kennedy organizes features two jazz orchestras, as well as “free food, tobacco, and ginger ale.” 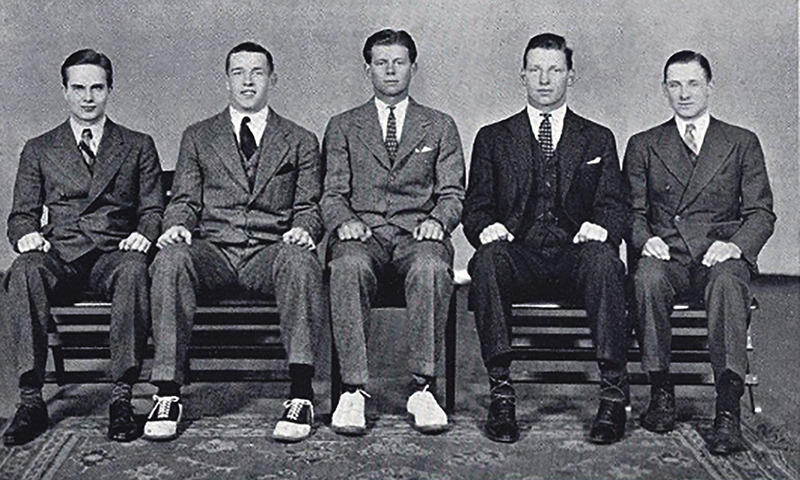 Meanwhile, at this same time, one of JFK’s favorite mistresses of all times, Swedish beauty queen Inga Arvad, is attending the 1936 Olympic Games luncheon in her honor, hosted by Adolf Hitler in Germany. After the war, Inga will become JFK’s steady sex toy that he will refer to as “Inga Binga.” 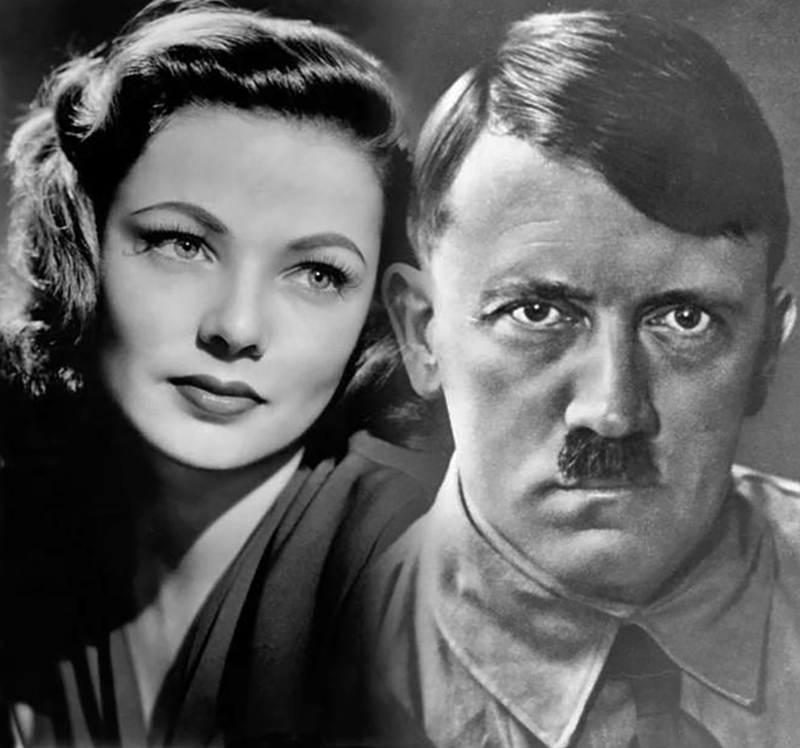 In 1937, while his father, Joe Kennedy is now Franklin D. Roosevelt’s U.S. Ambassador to England; JFK spends 10 weeks touring Europe in the summer. On July 1, he sets sail on the SS Washington then lands at Le Havre, France.

His convertible car is shipped over so he can drive the French highways. By the 13th of July he arrives in Paris and has lunch with the American ambassador’s secretary before visiting Versailles. The following day he’s at Napoleon’s Tomb before leaving for Italy.

Mussolini, Mass and Sex in Amsterdam

In August,1937, JFK tours Italy, visiting Milan, Venice, Pisa and Rome. He goes to a Mussolini rally then attends mass at the Vatican. By the middle of August, JFK is in Munich, drinking beer at the Hofbrauhaus after visiting the Deutsches Museum. Within a week, he’s back in London after a brief stop in Amsterdam to visit the famous red light district. By September 1937, Jack is back in school at Harvard. 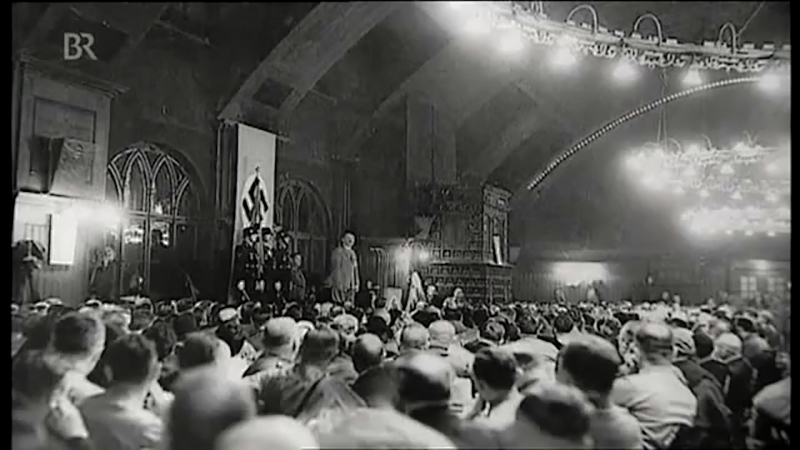 Before Heading back to school at Harvard, Kennedy stops off in 1937 to drink beer at the famous Nazi Hofbrauhaus in Munich.

The following year, 1938, at a school dance, JFK meets Mary Pinchot. The guy he cuts in on is her current boyfriend, William Attwood, who later is involved in the secret negotiations with the Castro regime which occurs just before Kennedy’s murder. She will eventually get married becoming known as Mary Pinchot Meyer. Her extramarital affair with John Kennedy will last throughout the 1950s and 60s. It is believed JFK truly was in love with Mary and has one last fling before leaving for Dallas in November, 1963. 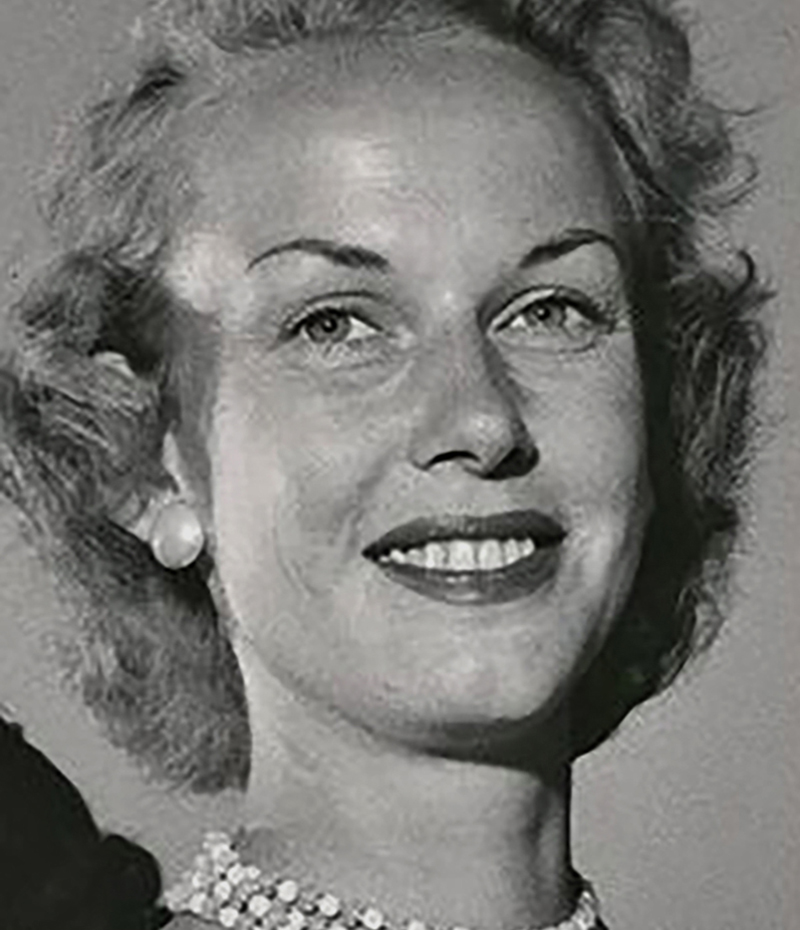 JFK Picks Louisiana Cotton in London with a Queen

In the summer of 1938, JFK is back in London and meets Patricia Honeychile Wilder, a spectacular beauty. She has just arrived in London as the Louisiana Cotton Queen, sent to promote the cotton industry in the UK. She and JFK are soon seen coming and going from the Ritz Hotel. At the end of August, Kennedy boards the SS Bremen and sails back to New York City 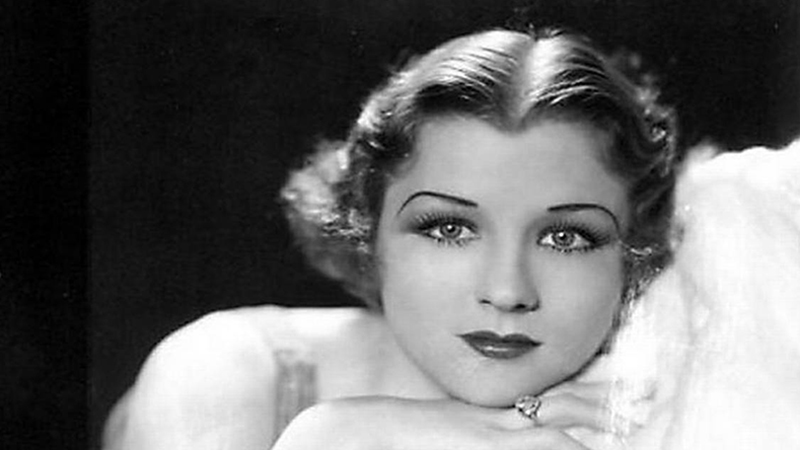 In 1938, JFK is still in London. Here he meets Patricia Honeychile Wilder. She has just arrived in London as the Cotton Queen from Louisiana to promote the cotton industry.

In February 1939, JFK boards the Queen Mary with his father, Ambassador Joseph Kennedy, sailing to England. He works as an assistant to his father, the ambassador, eventually meeting Queen Mary and having tea with Princess Elizabeth. While living overseas, JFK tours Europe, the Soviet Union, the Balkans and the Middle East and then travels back to the UK to visit his father. 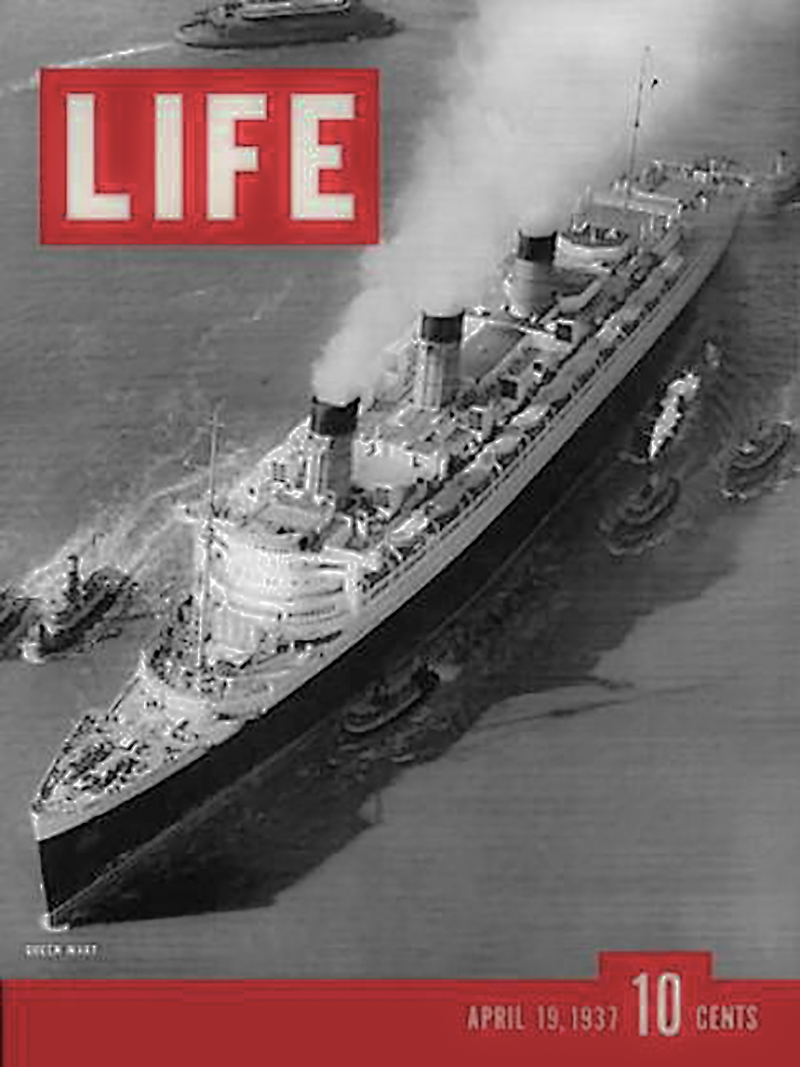 From an early age, JFK only travels in 1st Class style on his many trips around the world.

On September 2, 1939, a day before the United Kingdom and France declare war on Nazi Germany, a German U-boat torpedoes the Athenia, a Scottish passenger ship cruising northwest of Ireland. Of the more than 1,400 passengers, 117, including 54 Canadians and 28 Americans, are killed. 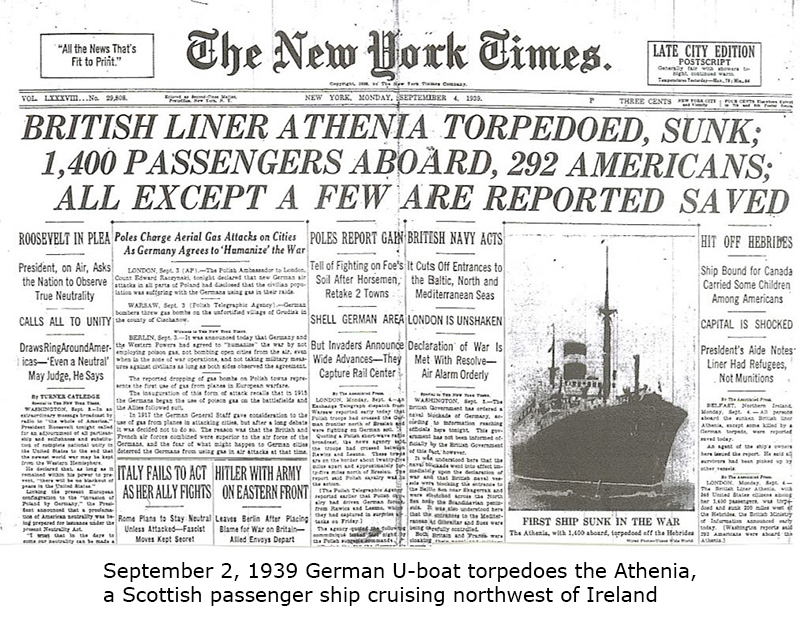 In 1939, the Scottish passenger ship Athenia is torpedoed a day before the UK and France declare war on Nazi Germany. JFK stays to help survivors.

The following day, JFK, with other members of his family, Kathleen, Joe Jr., his mother, and the ambassador, goes to the Stranger’s section of the House of Commons where, at noon, Prime Minister Chamberlain declares war on Hitler’s Nazi Germany.

Just before the beginning of his senior year, Kennedy writes a letter from Europe to school officials at Harvard, alerting them that he might be late for the start of semester because he is in Europe helping the survivors of a torpedoed ship.

Just after the outbreak of the war in September, 1939, Kennedy flies back to New York on board the Yankee Clipper. 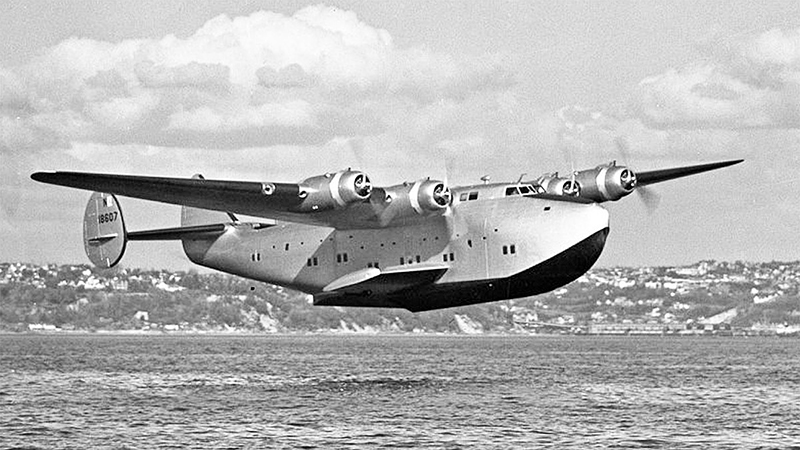 In 1939, JFK flies 1st class on the Yankee Clipper after touring pre-WWII Germany and England. He’s headed back to Harvard.

By the end of September, JFK is back at Harvard.