“He just paid attention to every little thing. He was very accommodating to people. He put a lot of IOUs in the bank, and when he needed them for something he really wanted, he could pull them out.”
-Senator Warren Magnuson from Washington

In 1951, during his third year in the senate, Johnson buys a ranch along the Pedernales River. He’s now a Texas rancher. Later it becomes the Texas White House. 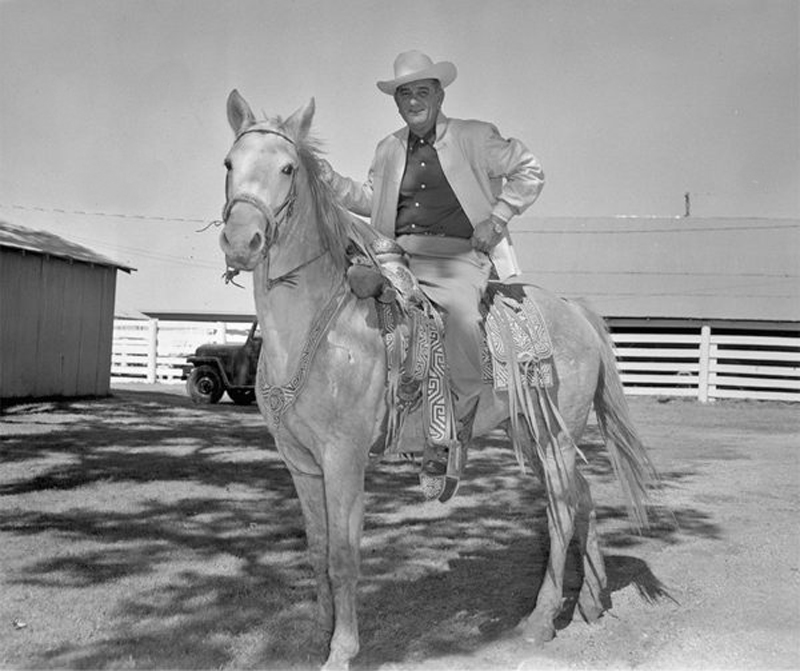 Working in the senate, Lyndon makes sure to know the desires and wishes of different members of Congress. He persuades, controls and directs Senators into political decisions that best benefit Lyndon. It’s his powerful capacity and ability to make personal relationships work in the Senate that makes him a force to contend with. Any day of the week, Lyndon knows what fears, desires, and wishes his colleagues have. He then uses them for his own political benefit. That’s what Johnson does best.

Lyndon either recruits you as an ally or isolates you as an enemy. It’s called the Johnson treatment, a combination of bullying and cajoling. He reminds you of past favors he has done or future favors he has promised. He is a predictor of doom if something doesn’t happen. When he begins working on you, you feel like you are under a waterfall, and it’s pouring all over you. He frequently says, “If you can’t eyeball a fellow and look him in the face, then you can’t tell what he’s going to do.” 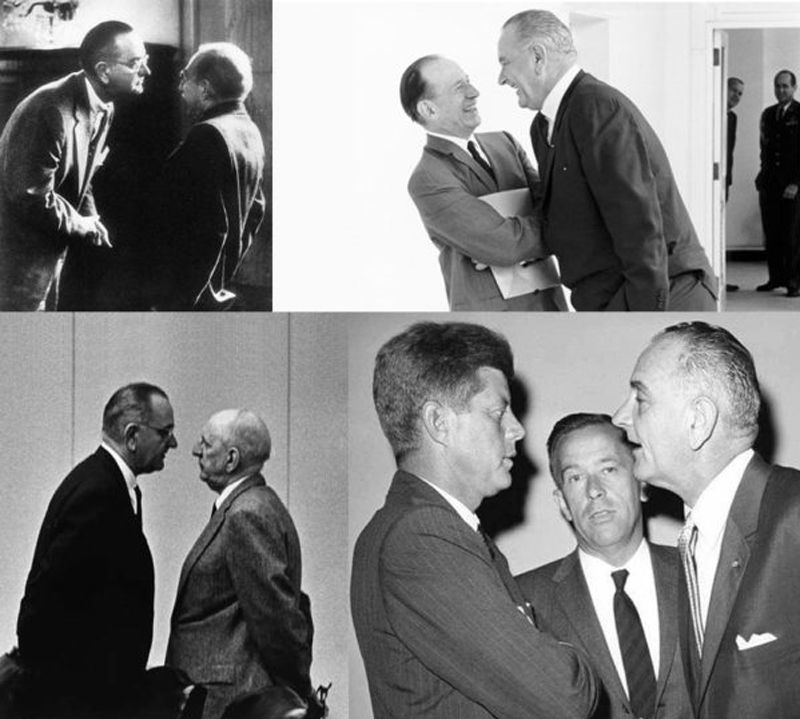 The mid-term elections in 1954 give control of the Senate back to the Democrats. This makes Lyndon Johnson the youngest Senate Majority Leader ever. He is 46 years old. A more powerful majority leader than LBJ would never reappear in the Senate. Johnson has biographies and resumes on all the other Senators. He knows every womanizer and all the drunks. He knows who wants on what committee assignment, just like he knows who wants to take their wife on a trip to the Bahamas. If someone needs to be out of town when a sensitive vote is being taken, Lyndon makes sure there is a pressing issue some place in the world to send him and his wife. Bobby Baker once told Lyndon, “I have ten Senators in the palm of my hand. It’s the good ole’ boy network in Washington that works best.”

In the Senate, Lyndon is always walking back and forth on the floor rattling silver dollars in his pocket. He always eats in a hurry, scarfing down his food with no manners. Sometimes, while seated at the table, he eats off the plate of the person on either side of him. He also is a man who knocks down two fifths of Cutty Sark every night and smokes cigarettes like crazy – that is, until a heart attack sends him to the hospital. 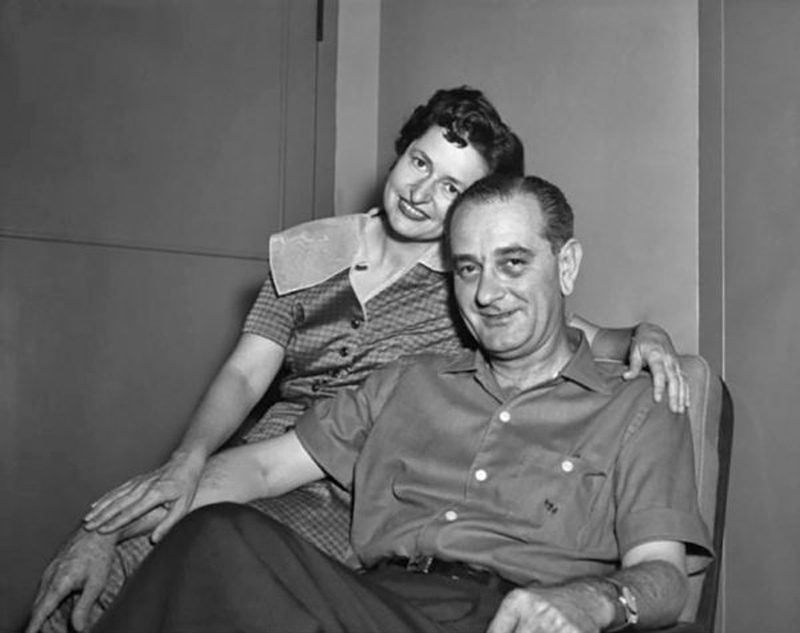 LBJ and Lady Bird at Bethesada Hospital after heart attack.

After Lyndon recovers from his heart attack, he goes back to the Johnson Ranch, but he doesn’t relax. Even when invited to go to a football game, John Connally says, “He would do nothing but talk politics. He couldn’t just relax and watch the game.”

The Civil Rights Bill of 1957 comes before Congress. No one in the senate can imagine what Lyndon will do. Up until know, Johnson has never had to vote on civil rights. In fact, he is on the record as a segregationist. After consulting with his old friend Richard Russell from Georgia, he convenes with the southern conservative Democrats. Everyone gets his message. Let’s pass this moderate civil rights bill, or Richard Nixon, who is going after the black vote, will cram a stronger bill down our throat. The famous “Johnson Treatment” works, and the bill is accepted by both sides. By passing The Civil Rights Act of 1957, Johnson frees himself of the segregationist image he seemed to be stuck with. 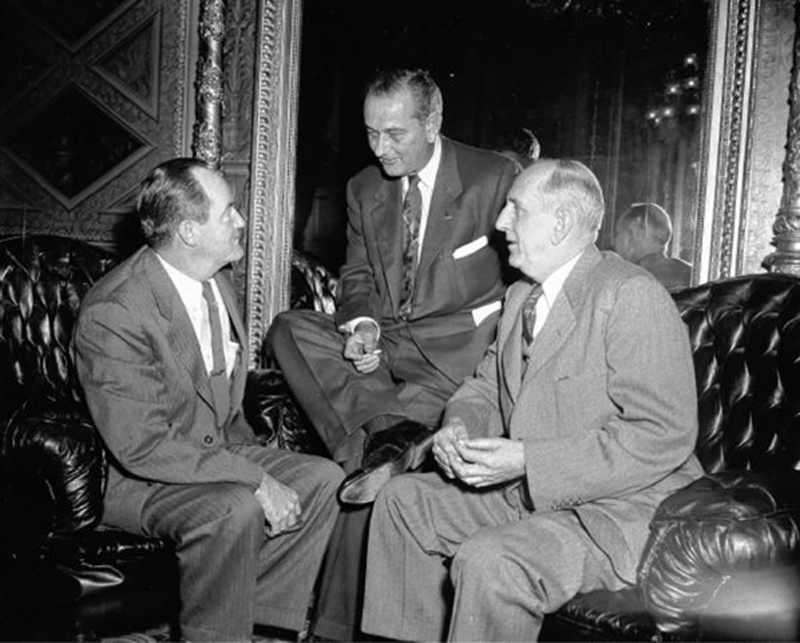 On July 3, 1958, Johnson, along with his senate secretary, Bobby Baker (also known as “Little Lyndon”), goes to Las Vegas. It’s opening night of the Stardust Hotel, and Lyndon is introduced to mobster Johnny Rosselli.