The early 1940s is a very tough time for Carlos Marcello, the New Orleans enforcer. Frank Costello makes large contributions to Earl Long’s 1940 campaign for governor, but it appears to be a lost cause. The 1940s are called the reform years in Louisiana, and the people elect Sam Jones in 1940 and then Jimmie Davis in 1944. Even New Orleans Mayor Robert Maestri is defeated by Lesseps Morrison in 1946. For many, it seems that the Huey Long political machine is dead. They were wrong. Even though the reform movement is in full swing and police raids are taking their toll on the slot machine business, the Mafia maintains a grip on the vice empire in Louisiana. The losses are at an acceptable level, and the mob hunkers down to ride out the storm. 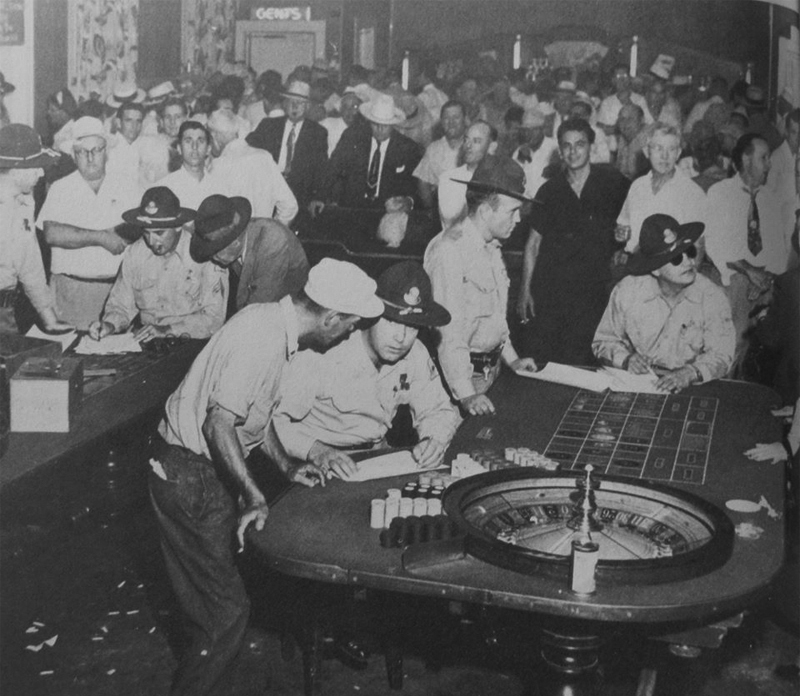 They didn’t have to wait long. By the end of the 1940s, slot machines and cat houses are back in the everyday life in Louisiana and turning huge profits once again. Frank Costello makes a move to the west bank of the Mississippi river in New Orleans. Kastel is very impressed with the Jefferson Music Company being run by Carlos Marcello. “The Little Man” now has the reputation for being a ruthless collector.

In 1945, Kastel and Marcello agree that the Jefferson Music Company will operate and install 250 machines in New Orleans. Marcello will keep Two thirds of the profits. Later that year, Costello, Kastel and Lansky are so impressed with Marcello’s business practices they bring him in as a partner when they open the Beverly Club, a plush gaming joint in Jefferson Parish.

Frank Costello and his wife Bobby at the Beverly Club in Jefferson Parish. His other partners in the club are Carlos Marcello and Phil Kastel.

The Beverly is not the only illegal casino operating in the New Orleans area.
Marcello has interests in the Southport Club, O’Dwyer’s and Club Forest, as well. The Beverly is, however, the only club with silk-covered walls, courtesy lipstick and perfume in the lavish ladies room, and a bandstand that converts to a full-sized stage with the press of a button. Behind the scenes, security is strict. Generators are fitted to guard against mischief during power outages. Floor-to-ceiling bars lock the storage room in the basement. Employees are searched at the beginning and ends of their shifts. Marcello’s gambling empire now includes “the most lavish illegal casino in the nation, the Beverly Club.” Marcello brings in the top entertainers and opulent furnishings long before Bugsy Siegel does it in Las Vegas
. 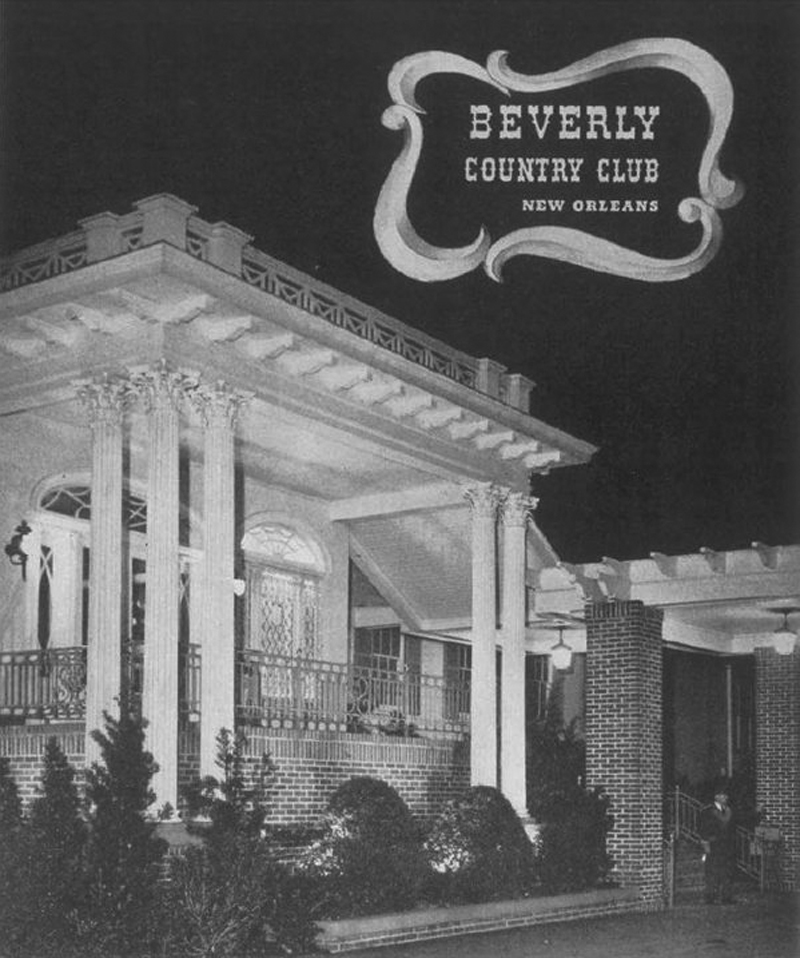 The Beverly Country Club is actually an illegal casino, one of the most luxurious in the nation.

In 1946, Marcello becomes a partner with Meyer Lansky and begins to receive his cut of the money from the main casinos in and around New Orleans. In a short time, the illegal state gambling network in Louisiana comes under his control. According to former members of the Chicago Outfit, Marcello is also receiving a cut of the money skimmed from Las Vegas casinos in exchange for providing muscle in Florida real estate deals. By this time, Marcello is crowned as the Godfather of the Mafia in New Orleans by the family’s capos and the Commission. He holds this position for the next 30 years.

In 1946, Marcello buys the Willswood Tavern outside New Orleans and renames it Moscas. The Marcello family owns the building to this very day, and the Mosca family still runs the restaurant. 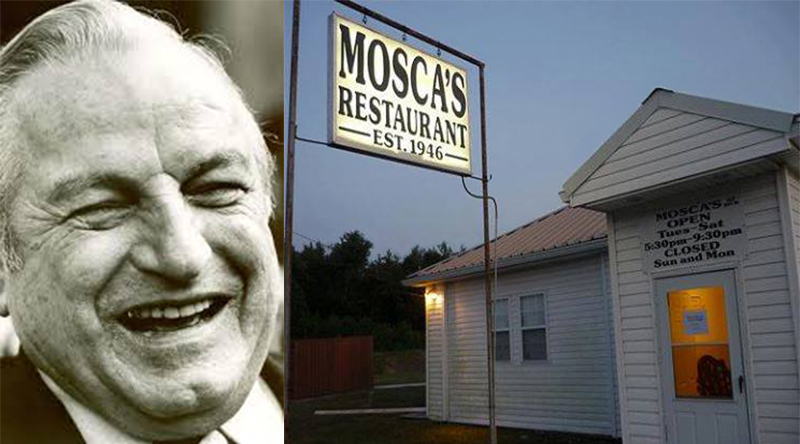 At Carlos Marcello’s famous Mosca’s Restaurant, many of Louisiana’s top gangsters and political leaders gather to dine and attend court with the “Little Man.”

Carlos loves the food from Moscas so much that he makes the restaurant his unofficial headquarters. From all over the Gulf coast, captains and lieutenants come to Moscas to give Don Carlos his piece of the take. From dawn to dusk, the flow of bookies, madams, corrupt lawmen, politicians, loan sharks and middlemen come to “take care of bidness” with the head Patron, Don Carlos Marcello. Once business is over, a river of wine and the continuous flow of Italian food come from the kitchen. Rumors abound that Provino Mosca was once also the chef for Al Capone.

In December 22, 1946, The Havana Conference is organized and is hosted by Lucky Luciano and Meyer Lansky. It is held at the Hotel National in Havana, Cuba. This is the first full-scale meeting of American underworld leaders since the Chicago meeting in 1932. Its purpose is to discuss mob policy, rules and business interests. All the crime families of the U.S. are invited. 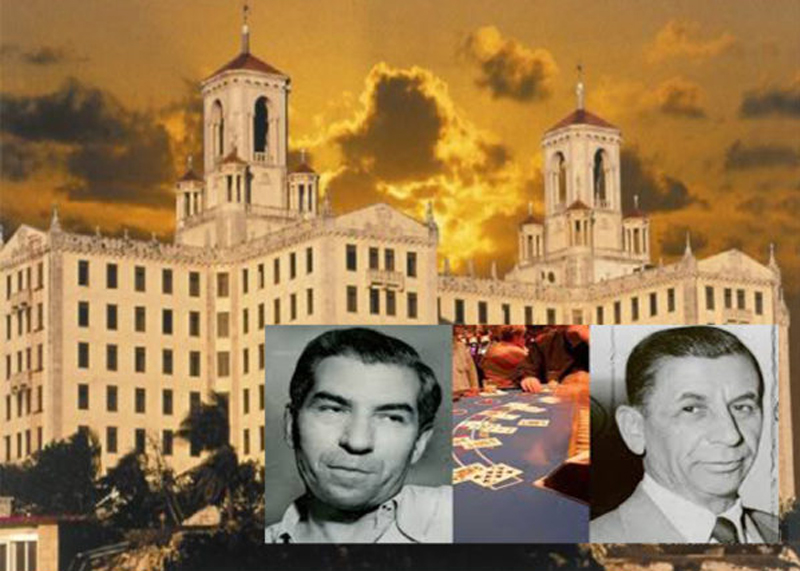 1946 Havana Conference, hosted by Lucky Luciano (L) and Meyer Lansky at the Hotel Nacional in Havana. All of the American underworld leaders attend.

Present are members of each delegation.

The first to arrive is Luciano, from Italy, but he has to travel to Havana with a false passport. He was recently deported from the U.S. At the conference, Lansky shares with all the delegation members his vision of a new Havana. It is a proposal of major profits for those willing to invest the right sum of money.

Entertainment at the conference is provided by, among others, Frank Sinatra who flies down to Cuba with his friends, Charlie and Joseph Fischetti (Al Capone’s cousins). They deliver two million dollars in cash to Luciano that is due to him from other business out west since his deportation.

Entertainment for the Havana Conference is provided by mob favorite Frank Sinatra. He arrives with the Frashetti brothers, Al Capone’s cousins.

The most important items that come out of the Havana Conference are the leadership of the New York mafia, the interests and control of the Havana casinos, the drug business and the Bugsy Siegel problem.

Luciano opens the Conference by presenting a motion that he maintains the title of Capi Tuti Capi “Boss of all Bosses.” Albert “The Mad Hatter” Anastasia seconds it, and Lucky is named as the main boss of bosses. The next item is the question of drug distribution. While some of the delegates like Frank Costello does not let his crews distribute drugs, narcotics are a big money maker for the families. Luciano is the main go between in “The French Connection” as it pertains to heroin traffic from Europe to the U.S.

La Cosa Nostra is in the drug business. It’s the largest importer and distributor of heroin, cocaine and marijuana in the U.S. The Havana Conference creates a monopoly in the drug business and divides it up between the different families. The distribution involves the drugs being shipped from Europe to Cuba, and then from Cuba to the ports of New York, New Orleans and Tampa.

The Luciano crime family will oversee the drugs being shipped to New York. In New Orleans, Carlos Marcello is put in charge. In Tampa, the overseer is Santos Trafficante Jr. The Havana Convention delegation members vote and approve the plan.

In 1947, “Silver Dollar Sam” Carolla gets deported to Sicily. Carlos Marcello is now the new leader of the New Orleans Crime Family. He becomes known as the “Godfather” and is fiercely independent. He does not allow any kind of outside involvement in his business. In fact other mafia families need his permission to even visit Louisiana.

Carlos Marcello is flying high. In 1949, he opens a new club called O’Dwyer’s, and a short time later, his 500 Club on Bourbon Street opens for business in the French Quarter.

Carlos Marcello opens O’Dwyers and the 500 Club on Bourbon Street in 1949.

Later that same year, Marcello becomes associated with the Court of Two Sisters and builds the Town and Country Hotel in Metairie. 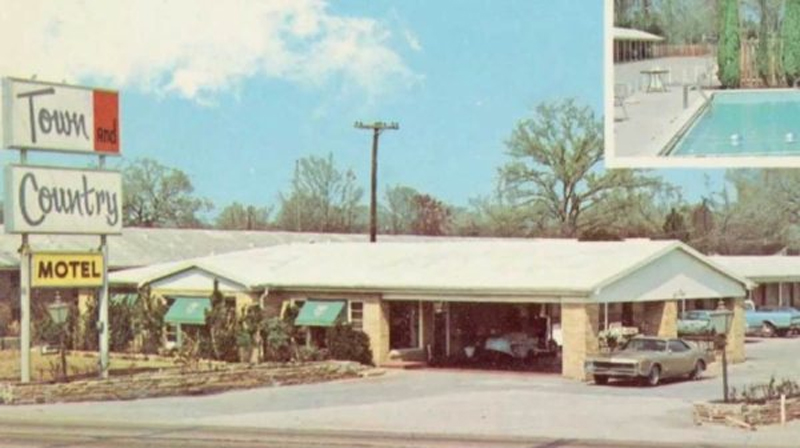 Carlos Marcello puts special guests up at his Town and Country Motel when they visit New Orleans. Bobby Baker gets a complimentary room here when he brings Ellen Rometsch in 1962. She turns out to be an East German spy who has sex with JFK in the White House.
Toggle Sliding Bar Area