The Mafia kingpin known as the “The Little Man” and “Godfather” is born in Tunis, French Tunisia, on February 1, 1910, as Calogero Minacori. He will go on to become the richest and most powerful head of a crime family in U.S. history. His name is Carlos Marcello.

Marcello’s parents are Giuseppe and Luigia Minacori. Upon arriving in New Orleans, they change their name to Joseph and Louise Marcello, and little Cologero becomes Carlos Marcello. .Later on, while living in New Orleans, eight more Marcello children are born as U.S. citizens. However, Carlos, the oldest child, was not born in the U.S. and never becomes a citizen. He will regret this for the rest of his life. 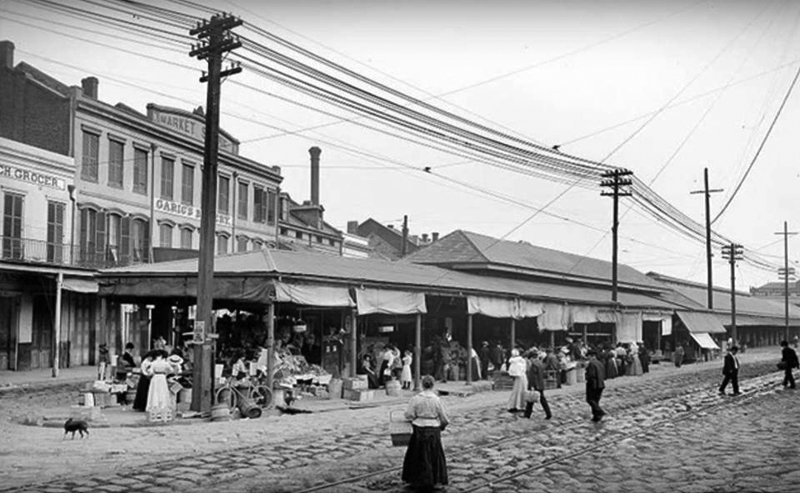 After several years, Carlos’ father purchases a rundown farm called the Stanford Plantation outside New Orleans. His father teaches Carlos how to handle a horse and wagon, with which he delivers the family produce to the French Market in New Orleans. 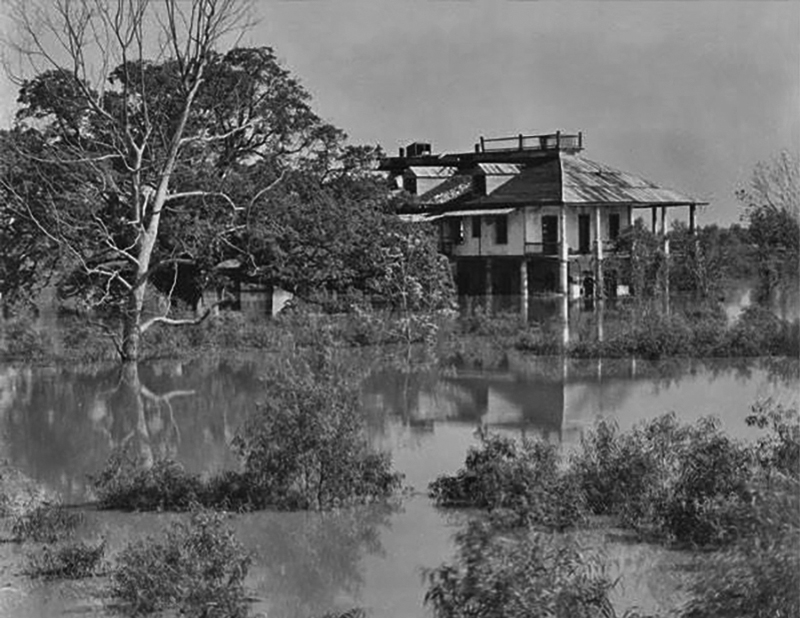 By 1924, the Sicilian population is bustling in New Orleans. Many have fled the poor living conditions in Europe. However, the old ways of the Mafia society in Sicily take hold in New Orleans, especially “Omerta,” the Mafia code of silence.

In 1928, at the age of 18, Carlos moves from the family farm to the French Quarter of New Orleans and begins a life of crime.

The next year, 1929, Carlos starts pulling off small bank jobs and burglaries. During one bank holdup, he uses two other local boys in the heist. They steal $7,000, but one of the local boys turns himself in and names the other two individuals involved. Carlos and the other boy are arrested, and all of the money is recovered.

Carlos is sentenced to nine years at the Angola Prison. Here, he is given the nickname of “Fagin,” a character in Charles dinkens’ story “Oliver Twist,” who uses young boys to steal from unsuspecting locals. 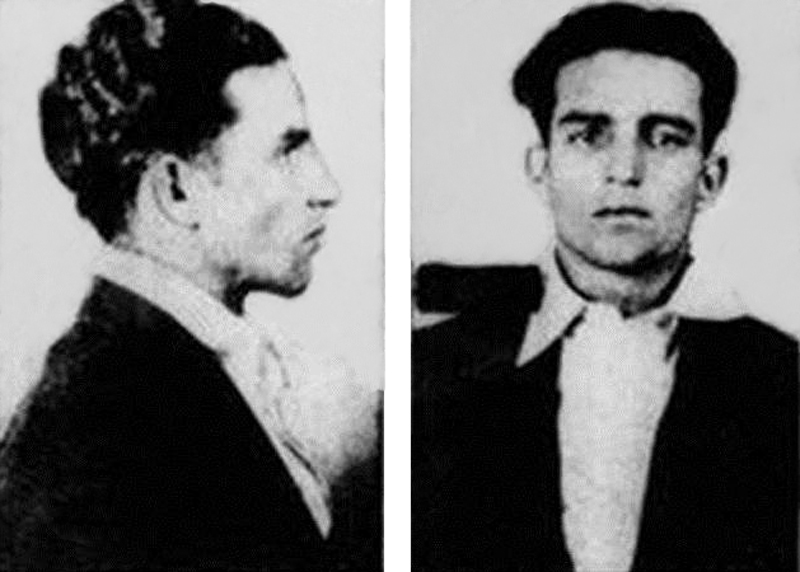 Carlos Marcello is sentenced to 9 years in Angola Prison where he is given the nickname “Fagin.”

But his freedom is short lived. The following year, Marcello gets arrested again for bank robbery, and this time is sentenced to 9-15 years of hard labor. 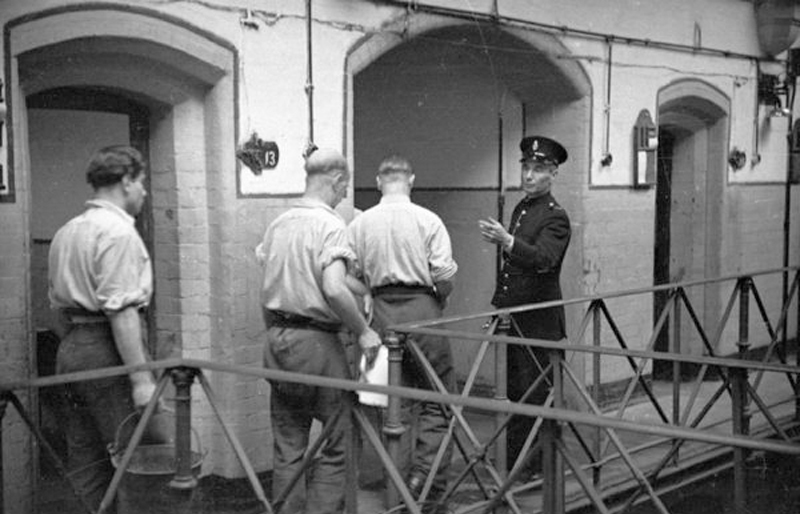 Carlos Marcello wiggles out of laboring in the license plate factory and finagles a job as the warden’s yard boy.

Marcello serves only five years of the sentence, and his prison time never appears on his record. By this time, Carlos has friends in high places. It’s a lesson Marcello never forgets. Having well-placed friends is the best way to stay out of trouble.

In early 1935, Frank Costello’s partner, Phil Kastel moves from New York to New Orleans to oversee the placement and collections of the slot operations. He runs the business out of the Roosevelt Hotel with James Brocatto (alias James “Diamond Jim” Moran, an ex boxer and one time bodyguard of Huey Long). Diamond Jim reports directly to New Orleans family boss Sam “Silver Dollar Sam” Carolla. While living in New Orleans, Kastel is shown around the city and finds the best locations for the slots. Within a very short time, about 1000 machines are installed throughout the city. They become an instant success.

While Marcello is in prison, Louisiana Governor Huey Long is assassinated, and his brother Earl succeeds him. The slots deal stays in place. According to rumors, New Orleans mayor elect Robert Maestri, Louisiana Governor Earl Long, and New York mobster Frank Costello have a meeting at the Arlington Hotel in Hot Springs, Arkansas. Maestri and Long make a pact in which they receive payoff money for not enforcing Louisiana gambling laws against Costello.

The Costello-Kastel partnership then sets up the Bayou Novelty Company to run the operation and gives a small percentage of the profits to charity. The partner in this new company is Jake Lansky, Meyer Lansky’s brother.

After Huey Long is assassinated, the police begin a crackdown on slot machine gambling, and many of the machines are seized. 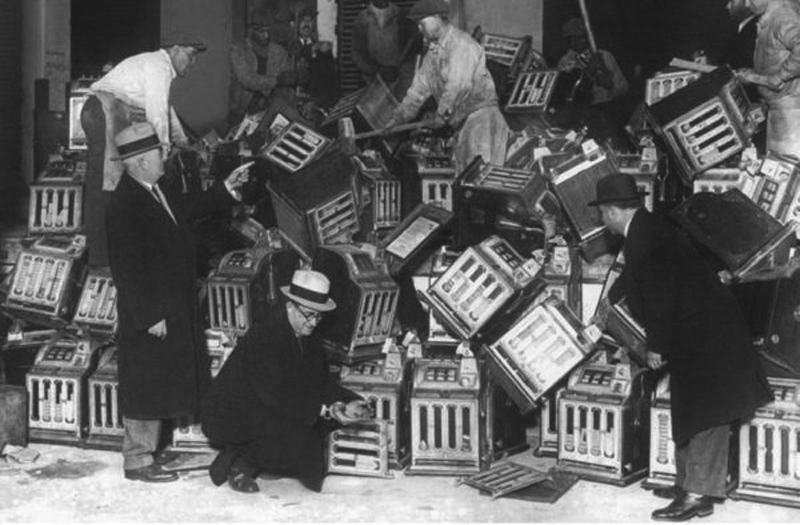 After Louisiana Senator Huey Long is assassinated, police begin a crackdown on slot machines, and many are seized and destroyed.

However, Costello finds a way around the law and rigs the machines to pay out with mint candy and a slug coin to the winner. The slugs are then redeemed by the slot machine owner for cash. The Louisiana Mint Company becomes a new business, and the Pelican Novelty Company begins running the slot machines.

In September 1936, Carlos Marcello marries Jacqueline Todaro the niece of Frank Todaro. Frank is the underboss of the New Orleans Mafia and an associate of “Silver Dollar Sam” Carolla, the head of the New Orleans Crime Family. Marcello’s position in the family begins to rise, and he becomes one of Carolla’s lieutenants.

In 1938, Marcello is arrested again and found guilty of selling 23 pounds of marijuana. He is sentenced to Angola Prison once again and fined $76,830. He only serves 10 months and is released to the custody of Carolla.

In 1939, a Ford 3-ton truck pulls up to a backstreet warehouse on New York’s lower east side. The warehouse door is closed as Carlos Marcello piles out of the truck and walks to the rear tailgate. After swapping a few brief code words in the dark, the warehouse door slides open. Then, eight dockworkers begin carrying new slot machines to the truck. As soon as 150 machines are loaded, the Louisiana licensed vehicle begins the long journey back to New Orleans. Carlos is now making routine trips from New York to New Orleans. He’s is a respected member of the Sam Carolla gang, and the slot machines will one day make him rich. Carolla, along with Marcello, runs all illegal gambling operations up and down the Gulf Coast during the 1930s and 40s. 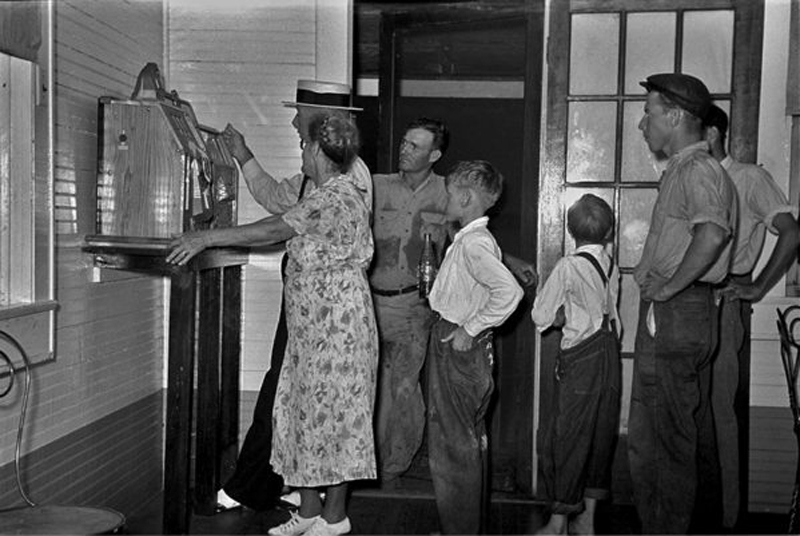 Carlos Marcello’s slot machines are a novelty in 1938. Within a few years, he will control the slot machine business for the entire state of Louisiana.

By the end of 1939, Marcello has slot operations in Jefferson, St. Bernard and St. Landry Parish. In fact it’s the sheriff of St. Landry Parish, D.J. “Cat” Doucet, who allows Marcello to extend the Mafia’s gambling control throughout the state.