“Oh, God, can you ever imagine what would happen to the country if Lyndon were president?”
-John F. Kennedy to Jacqueline Kennedy.

In 1960, Lyndon Johnson shares with the public what everyone already knows. He’s going to run for the Presidency of the United States. But John Kennedy, the young wealthy senator from Massachusetts, is looking to wrap up the nomination. Johnson sourly calls Kennedy “sonny boy,” but on the first ballot, JFK easily wins the nomination.

1960 – Johnson runs for President, but the charming JFK wins the nomination on the first ballot.

Now, naming a Vice-President is all that is left. What Johnson will do if Kennedy offers it to him is anyone’s guess. Bobby Baker is said to have told Johnson, “Mr. Speaker, John Kennedy knows no Catholic has ever been elected president in the history of this country. He knows that the only chance in here to be President of the United States is if you run as his vice president. The vice president job is not worth a warm bucket of spit, but you’re one heartbeat away from the presidency.” 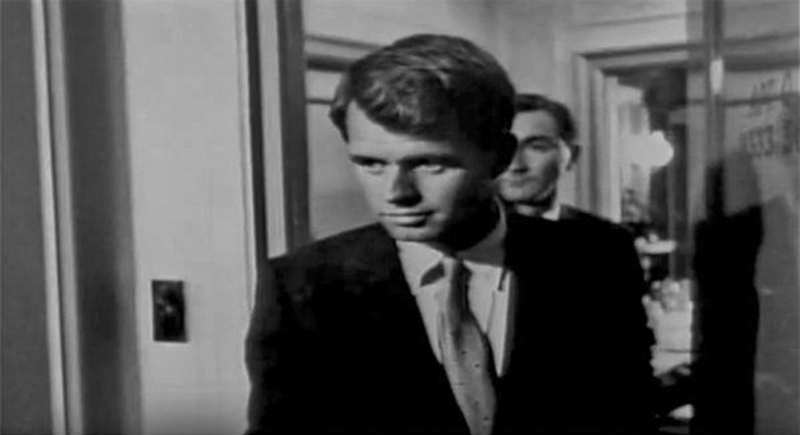 Bobby Kennedy comes to Johnson’s hotel room to tell him if he knows what is good for him he should drop out of the race.

JFK actually wants Stuart Symington of Missouri to be his running mate. Having LBJ on the ticket is creating turmoil and chaos at the convention. Supposedly, Robert Kennedy goes to Johnson’s hotel room at 10 a.m. the day of the vice presidential announcement. He screams at LBJ that if he knows what’s good for him he’ll get off the ticket. LBJ doesn’t like Robert Kennedy, and the feeling is mutual. In fact, they hate each other.

Robert Kennedy and Lyndon Johnson can’t hide contempt that each has for the other.
In 1960, LBJ gets on the ticket as vice-president, with a little help from J. Edgar Hoover’s sex files on JFK.

Fortunately, LBJ’s next door neighbor and old friend is J. Edgar Hoover.
Hoover keeps secret files on everyone in power, especially the sex-crazed JFK. And Hoover has his own personal reasons for wanting LBJ on the ticket. Hoover can’t stand the Kennedy brothers, either. He also knows that they plan to force him into retirement if JFK is elected. Hoover owes his allegiance and friendship to LBJ. Between 1951 and 1961, the FBI budget has tripled at the hands of Senate majority leader Lyndon Johnson. When LBJ steals the 1948 election from Coke Stevenson, J. Edgar Hoover flies down to Austin for the victory party at the Driscoll Hotel.

Hoover gives Johnson the JFK sex files. Giving LBJ a little dossier with JFK sex photos was the least he could do for his old friend. That evening LBJ and Sam Rayburn show up in JFK’s hotel with Hoover’s dossier. Johnson’s message to Kennedy is, “You need me, you need Texas, and if you don’t take me, I’ll just give this dossier to dink Nixon, and you can sort things out with him in the fall election.”

That very evening, Lyndon Johnson is announced as the vice-presidential candidate.

The next day, Johnson is asked by a reporter “How could you give up the Senate Majority leadership, which is one of the most powerful positions in Washington, to become Vice President…a job that has no power at all.” LBJ replies, “I’ve checked, and one in four vice presidents become president upon the death of the president, and frankly, I’m a gambling man, and I like the odds.” LBJ later adds “Power is where power goes, and I’m going to make the vice president a transformation of power.” 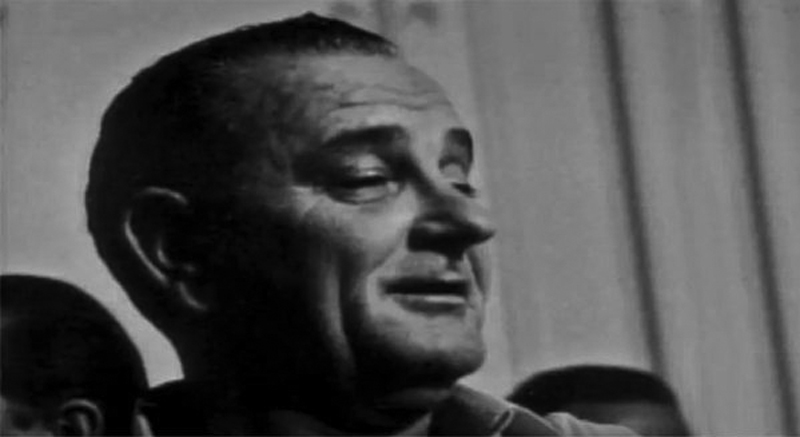 LBJ hates the thought of being vice-president, but likes the odds it will lead to the presidency.

The moment LBJ is announced as the vice presidential running mate at the convention, his look of disappointment is obvious. The vice presidential years are pure agony for Johnson…it is devastating. JFK treats Johnson with a modicum of respect, but the same can’t be said for the other people who surround JFK, especially Robert Kennedy. The snobbish Kennedy supporters call Johnson “Rufus Cornpone.”

Conversely, LBJ thinks JFK is a “dumb-ass” who’s in way over his head. LBJ tells Bobby Baker that, after watching JFK muddle through in the Senate, it greatly lowered his opinion of an Ivy League education. “Hell, John Kennedy not only got into Harvard, he got OUT of Harvard. He thinks with his dink. He’s no better than a damn monkey.”

LBJ sets out to prove his point. In 1961, Johnson has Bobby Baker, also called “Little Lyndon,” partner up with a few other Washington insiders and form the private Quorum Club in the Carol Arms Hotel on Capital Hill. A year later, Baker builds the Carousel Motel in Atlantic City for the same purpose. 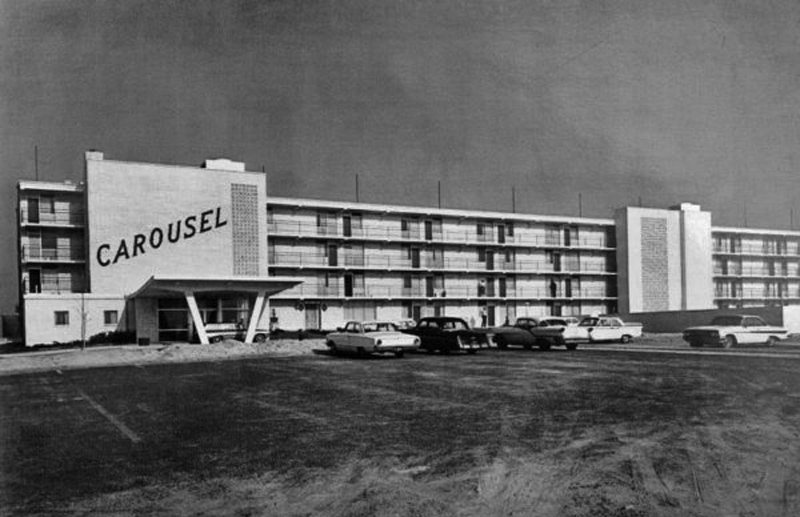 Bobby Baker’s Carousel Motel in Atlantic City was the favorite hideaway spot for Washington insiders during 1962 & 1963.

Quorum Club members are senators, congressmen, lobbyists, and other well-connected people in Washington, D.C. The members like having a place where they can drink, dine, play poker, and share secrets in private – and maybe have a discrete liaison with one of the sexy ladies who work at the Quorum Club. What the members don’t know is that LBJ is using the Quorum Club to find out the latest gossip in Washington, who’s sleeping with whom, so to speak, and then using that information for his own advantage.

LBJ sometimes uses the information to blackmail individuals into doing whatever he needs them to do. LBJ also has an information-sharing deal with J. Edgar Hoover. Many secrets about JFK and other high-ranking political figures are passed between the two men.

JFK is given an “honorary membership” that allows him access the Quorum Club’s stable of girls. LBJ and Hoover will gain a treasure-trove of information from JFK’s myriad and sometimes kinky dalliances. 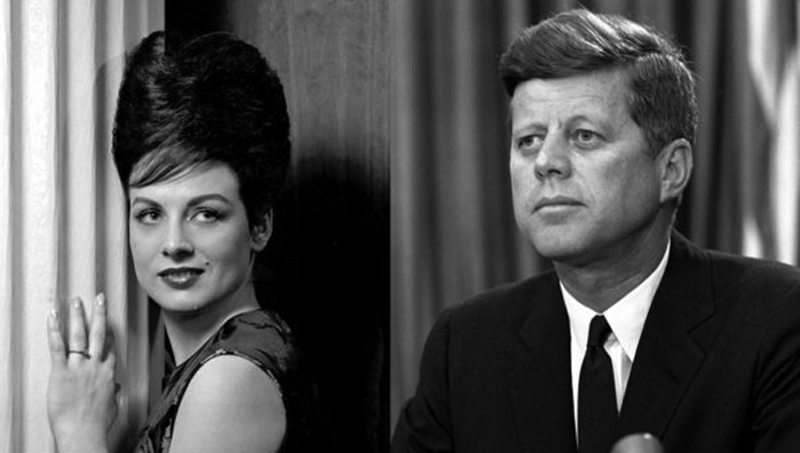 Much of that information emanates from one girl in particular, Washington party girl Ellen Rometsch. She works at the Quorum Club as a waitress. “She is very attractive, an Elizabeth Taylor look-alike,” Bobby Bakes says. Members of the club soon begin paying attention to Rometsch. Whether it’s the Quorum Club outfit that she wears or her endowments, or both, Rometsch begins moving in the fast lane.

Bobby Baker is very interested in her and takes her on holiday to New Orleans. While in New Orleans, Baker gets a complimentary room from an old friend of LBJ, Carlos Marcello. During his weekend stay in New Orleans, the New Orleans kingpin provides Baker with the deluxe suite at his Town and Country Motel plus all the trimmings a visit to the Crescent City would call for.

Baker later arranges for Ellen to have a sexual relationship with JFK. To say that JFK is pleased is an understatement. JFK personally calls Baker and says, “Bobby, that was the most sensational sexual experience I’ve ever had.”

A few months later, a new girl goes to work at the Quorum Club. Her name is Pilar, and Ellen Rometsch soon befriends her. Before long, Ellen introduces Pilar to JFK, and the three of them engage in a round of sexual adventures. When J. Edgar Hoover learns that Ellen Rometsch is actually an East German spy, his interest in the relationship goes to a new level. He begins looking into Pilar’s background, as well, but finds nothing there. Fidel Castro’s intelligence apparatus in Cuba has done a masterful job of giving Pilar an identity that is completely innocuous.

Hoover gives Johnson information about JFK’s relationship with Rometsch. At this point, however, JFK isn’t the problem. JFK actually has come to respect LBJ’s political skills and treats him with a degree of respect. JFK even makes LBJ head of the space program and sends him out to spread the word about America’s commitment to space exploration. 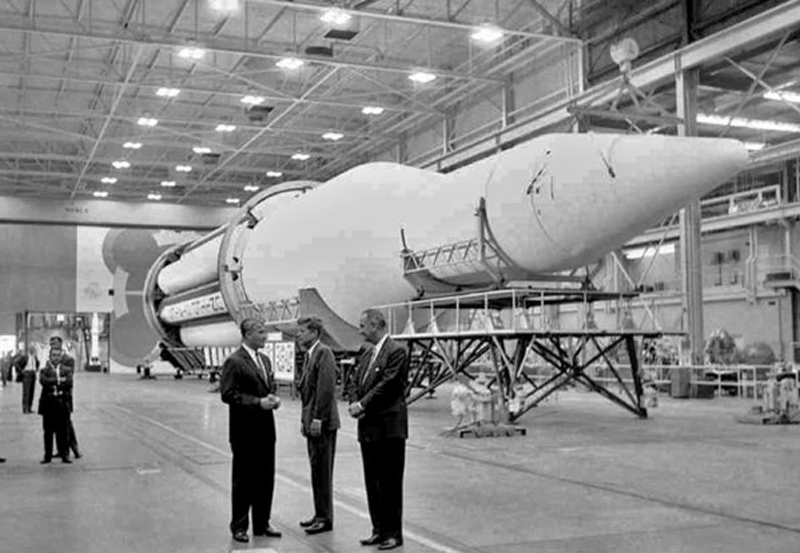 LBJ visits 26 countries, and does it in style. He takes along his oversize bed, the special nozzle for his shower, cases of Cutty Sark, and thousands of pens and cigarette lighters with the LBJ logo. Abroad, he feels like he’s on center stage.

At home it’s the Kennedy’s who are in the limelight. LBJ goes from being one of the most powerful men in the U.S. to one of the least powerful. He is sent on the road for funerals and trivial meetings. He is cut out of the loop of power. When LBJ visits Scandinavia, Robert Kennedy sends an unclassified correspondence so everyone will read it. The embassies are basically notified that in no way does the vice president speak for the government of the U.S. He is not to be received as an envoy of the president. 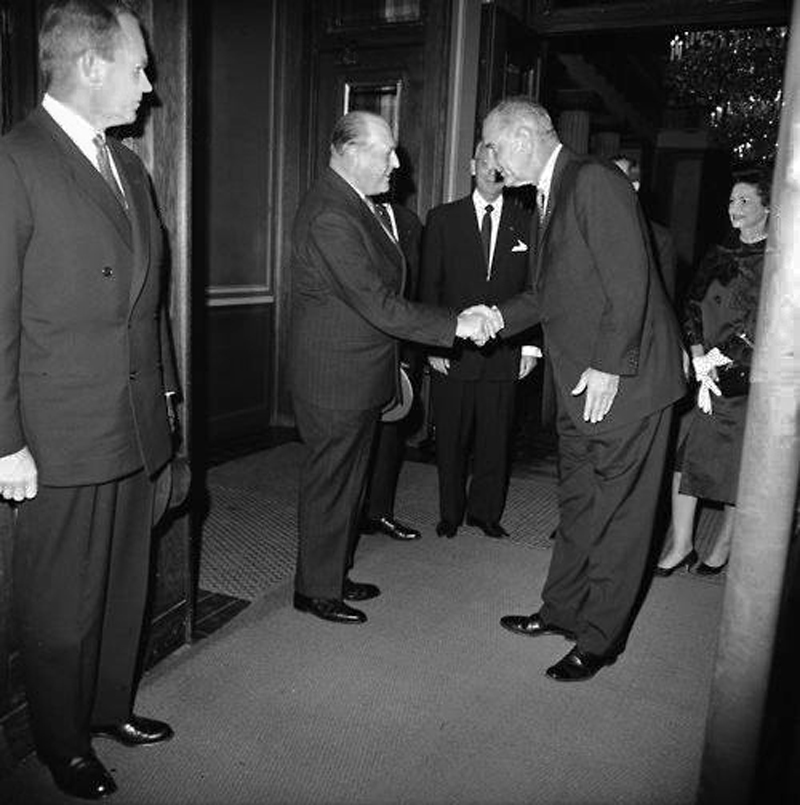 On a visit to Scandinavia, Vice-President Lyndon Johnson is received by King Olav V of Norway.

LBJ isn’t used to this kind of treatment. He is embarrassed and humiliated. Also, he thinks the Kennedys are planning to dump him from the ticket in the 1964 election. To make matters worse, LBJ is caught up in the Bobby Baker and Billie Sol Estes scandals. Baker is Johnson’s bagman who has collected millions of dollars in bribes for LBJ over the years. In 1963, LBJ tells an aide, “My future is behind me.”

As LBJ leaves for Texas in November; the Bobby Baker hearing is going on in Washington. LBJ’s neck is on the line. The Billie Sol Estes trial is also going on. LBJ faces the real possibility of not only being dropped from the ticket but also of going to prison. The problems are complex, but the solution is simple, if unimaginable. Eliminate JFK, and all the problems go away – and LBJ becomes President of the United States.