The 1950s are years of tremendous expansion in the Carlos Marcello crime family. Drugs, prostitution, gambling and extortion are all making the “Little Man” one of the wealthiest crime heads in America. Drug shipments from Cuba are finding their way up and down the Gulf coast with the help of Marcello’s fleet of shrimp boats. 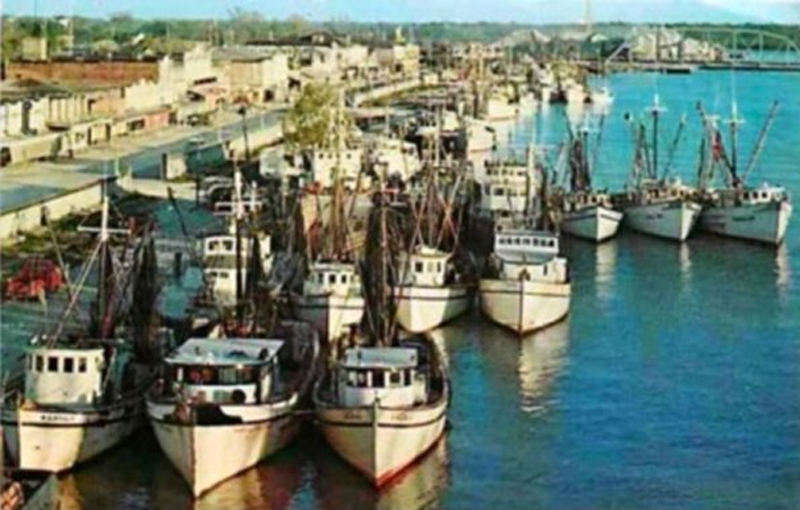 Carlos Marcello uses his shrimp boat fleet to distribute drugs from Cuba up and down the Gulf Coast from Florida to Texas.

New partnerships and associations are made in Texas with Sam Maceo out of Galveston. The Balinese Room that Marcello and Maceo open in Galveston is on par with Marcello’s Beverly club in New Orleans. Top entertainers from New York and Los Angeles perform to jam-packed ballrooms, complete with gambling casinos and fine dining. In Dallas, Joseph Civello controls the vices for Carlos Marcello. Even big Texas oil is in the middle of his business deals.

Audiences flock to Marcello’s Balinese Room in Galveston to see famous headliners from Hollywood and New York. The ballroom is filled with patrons who also enjoy fine dining and casino gambling. The Balinese is every bit as lavish as Marcello’s Beverly Country Club in New Orleans.

This is a golden age for Carlos Marcello’s crime family. His empire now reaches from Texas to Alabama, and the many ports in between (notably Houston and New Orleans). Drugs smuggled into the U.S. across the Mexican border in his territory make him an important part of the highly profitable French Connection heroin network.

Next to New Orleans, the most important city in the invisible empire of Carlos Marcello is Dallas. Big D does not have a Mafia family of its own. Its underworld is a satellite of the Marcello organization, and its leaders take their orders from Carlos Marcello. The New Orleans family’s network in Texas is an elaborate insulated and independent operation where Marcello reaps the benefits while remaining behind the scenes. Carlos Marcello’s slot machines are found almost everywhere in Texas. The Marcello gambling syndicate in Texas by this time numbers 800 bookmakers handling gross revenues of $700 million a year.

Marcello appoints his underboss, Joe Civello, to run rackets out of Dallas. Civello, in fact, represents Marcello at the Appalachian conference in 1957. Marcello’s absence keeps him from being arrested in an F.B.I. raid that takes down the major Mafia players at the time. 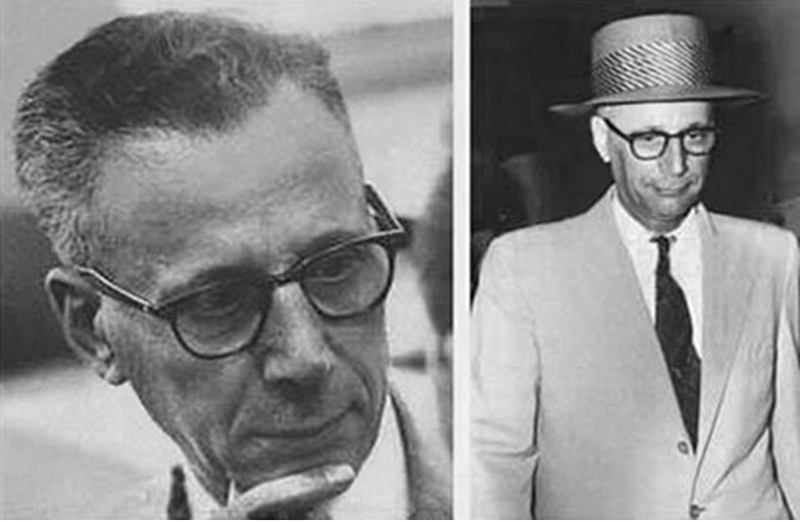 Carlos Marcello appoints his underboss, Joe Civello, to run rackets out of Dallas. Jack Ruby is an associate of Civello.

Long before Robert Kennedy becomes U.S. Attorney General, he knows about Joe Civello, Marcello’s representative in Dallas. Bobby thinks that Marcello, through Trafficante in Florida, plays a major role in international drug trafficking. As Bobby certainly notices, the Federal Bureau of Narcotics office in New Orleans believes that Marcello receives narcotics from Trafficante in Florida on Teamsters’ trucks. They also believe Marcello has a front company that smuggles drugs from Mexico without interference from U.S. customs using his fleet of shrimp boats.

Early on, Marcello involves Civello in racket connections near Baton Rouge, Louisiana, even before Civello moves to Dallas. These activities encompass a heroin and cocaine grid that goes from Dallas to New Orleans to Chicago. In the 1950s, Marcello and Civello quietly become partners in a Dallas–New Orleans relationship that will last for decades. This relationship is confirmed when Federal agents find telephone records that show a number of calls between Civello and Marcello in New Orleans. Jack Ruby is also a frequent visitor and an associate of Civello. After Ruby moves to Dallas, he is linked to narcotics traffic, as well as the call girl-prostitute ring. The dancers and stripers that work in Marcello’s bars and clubs in New Orleans also work in Jack Ruby’s Carousel Club in Dallas and are interchanged on a regular basis.

Marcello’s payoff men in the fifties are principal financial backers of Lyndon Johnson’s political campaigns in Texas. Many believe some of the backers are Sid Richardson, Clint Murchison and George and Herman Brown of the Brown & Root Company. During the 1950s, Richardson and Murchison own the famous Del Mar racetrack and Hotel Del Charro in La Jolla, California. 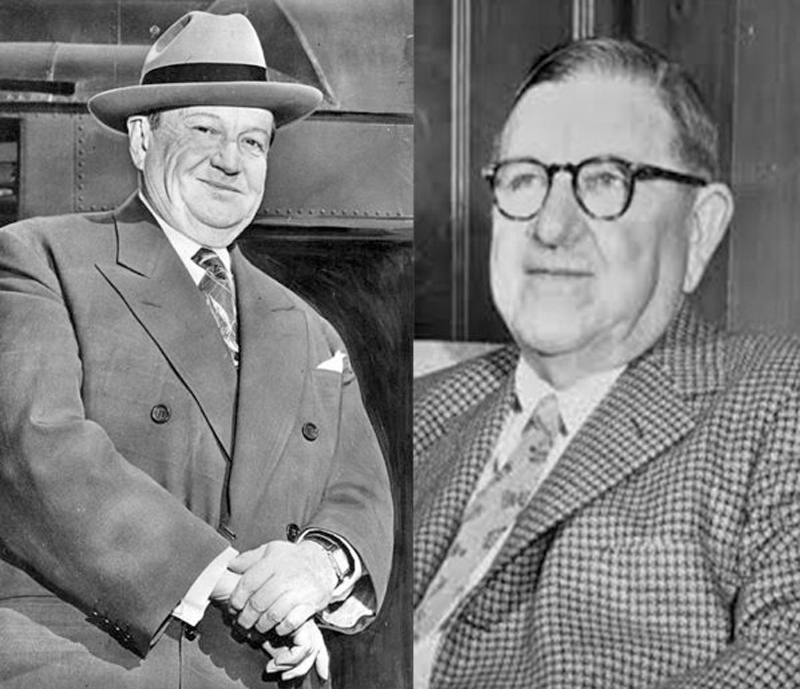 The track and hotel not only use Marcello’s race wire service, but also his lucrative call girl operation. Regular complimentary guests are J. Edgar Hoover and his lover assistant Clyde Tolson. Some say Marcello has caught the FBI couple in scandalous sex photos and keeps the pictures in case they are needed. It is also known that Hoover is aware of the existence of the portfolio of photos. 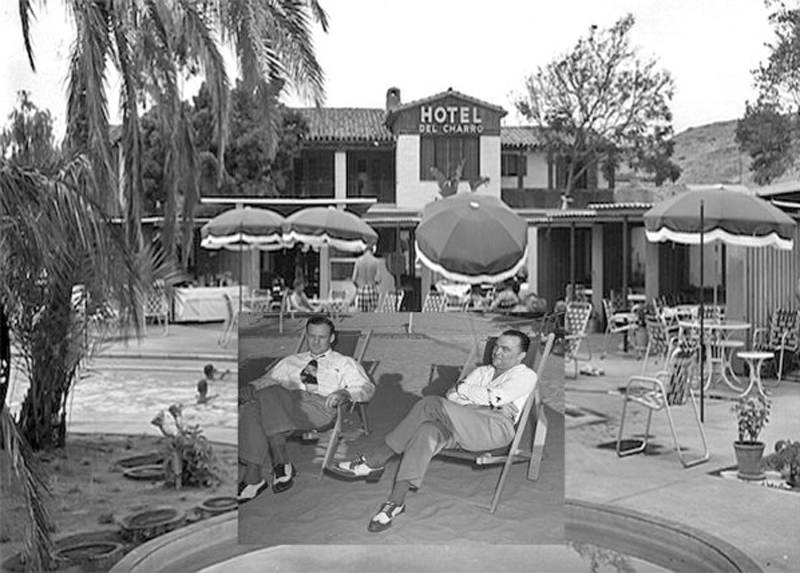 In 1956, a 16-year-old Lee Harvey Oswald delivers his uncle’s bookmaking betting tickets to Frenchy Brouillet, a 21-year-old bagman for Carlos Marcello. Lee’s uncle, Charlie Dutz, runs one of Carlos Marcello’s betting services. Lee has known Marcello as “Uncle Carlos” all his life by way of his real Uncle Dutz.

Back in Texas, the illegal profits from Marcello’s slot machines in Dallas and Houston are crucial to the success of Johnson’s senatorial campaigns. Johnson depends on this money. He helps kill in committee all anti-racketeering legislative proposals that could affect Marcello’s activities in Texas. In return, Johnson receives in excess of $50,000 a year (equivalent to $500,000 in 2018 dollars) from Marcello’s payoff operation.

Robert Kennedy, early on in his career, says Marcello, is a top syndicate member, if not the top Mafia boss. He wants to nail Trafficante and Marcello, but the Federal Bureau of Narcotics has only four agents in its Miami and New Orleans offices. While the FBI has the manpower, they decide not to place wiretaps on the two mobsters. These two are the only Mafiosi to receive such special treatment from J. Edgar Hoover. New Orleans FBI agent Regis Kennedy even makes the shocking claim that Marcello is not involved in crime. The FBI agent says that Marcello is a lowly “tomato salesman.” 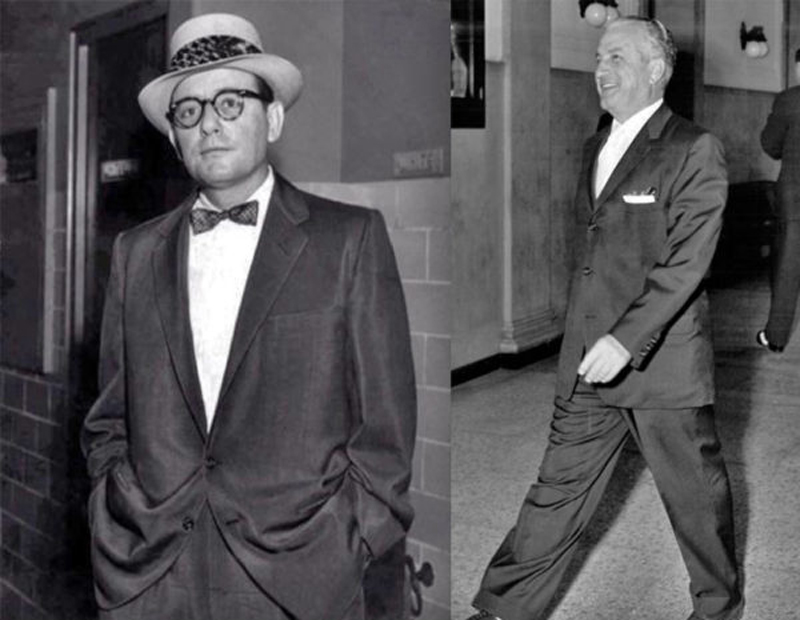 Santo Trafficante, Jr., and Carlos Marcello get special treatment from J. Edgar Hoover and the F.B.I.

The F.B.I.’s “hands-off” approach to Marcello is best explained when Johnny Rosselli boasts to Jimmy “The Weasel” Fratianno that Hoover was once arrested for having gay sex in New Orleans and Marcello has the photos to prove it. 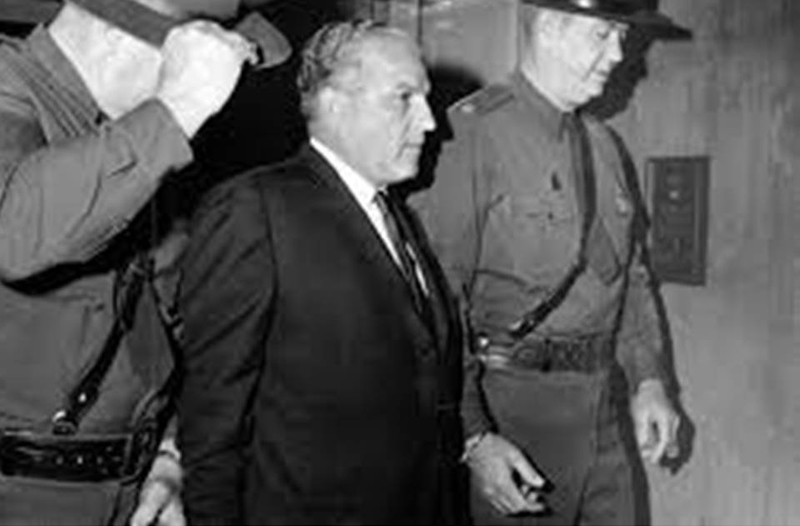 In the 1950s, Carlos Marcello is an important person who is constantly fighting deportation efforts by the Federal Government.

Marcello’s political shrewdness spreads to national politics. He is an important person whose territory covers many states and who is constantly fighting deportation efforts by federal authorities. His influence in Washington comes from several sources. Marcello employs only well-connected Washington, D.C. lobbyists whose clients include the Somoza family and Lyndon Johnson, one of the most powerful members of the Senate. LBJ receives support from Marcello during the 1950s in the same way that powerful mobsters supply money to powerful politicians in many parts of the country.
In July, 1958, Marcello opens the Town and Country Motel in Metairie, Louisiana. This becomes his headquarters for the next thirty years. 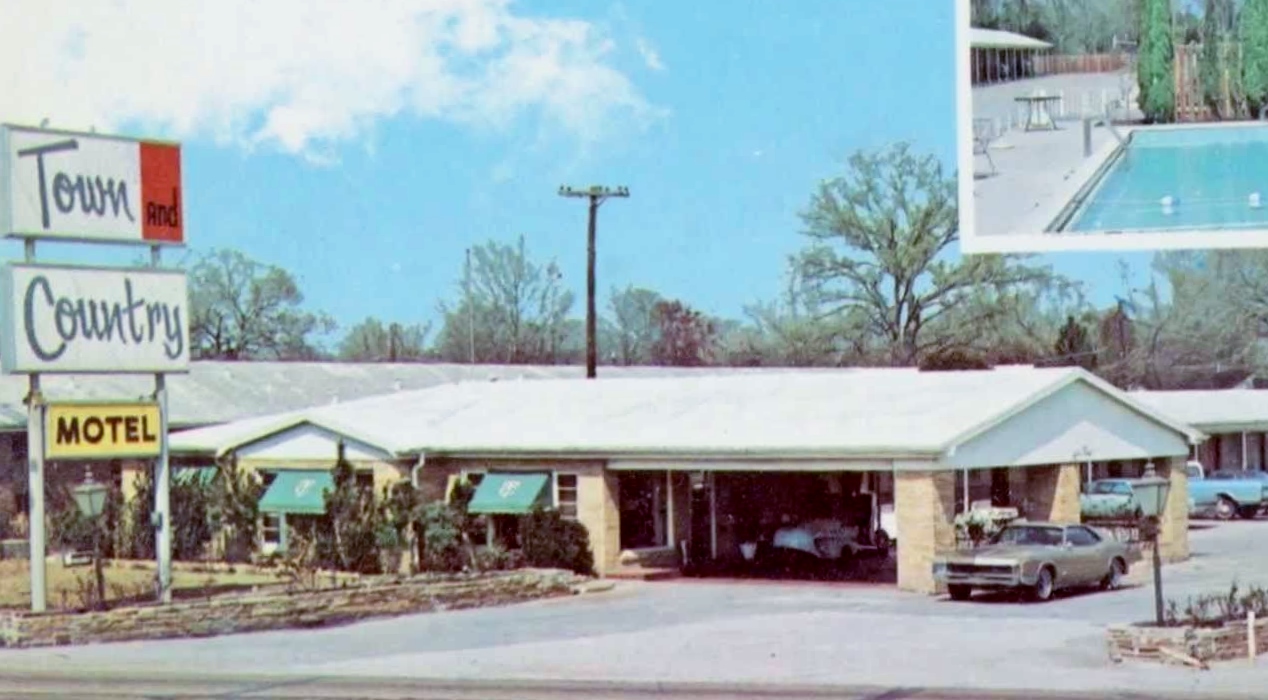 The Town and Country Motel in Metairie, Louisiana, is Carlos Marcello’s headquarters from 1958 to 1961.

On March 24, 1959, the U.S. Senate committee investigating organized crime has Carlos Marcello appear along with other members of the Mafia. Chief Counsel is Robert F. Kennedy, along with his brother John F. Kennedy. Marcello takes the Fifth Amendment 152 times, refusing to answer any questions. This infuriates Bobby Kennedy and sets off a personal war that will be waged between the two men, which won’t end until Bobby Kennedy is assassinated in 1968.

Marcello isn’t even a US citizen, having been born in Tunisia, although for much of the 1950s, he’s been able to calm this problem thanks to bribes and political favors from J. Edgar Hoover. New Orleans narcotic agents and even the chief of police claim they don’t care about Carlos Marcello or the Mafia. They say the city cops have no interest in who brings the dope in. That’s the job of federal boys.

Anyone who crosses the New Orleans boss is dealt with severely. Marcello not only has his enemies killed, but sometimes their bodies are dissolved in lye and dumped on his 6,500-acre private estate outside New Orleans called Churchill Farms. The locals call it “Marcello Gumbo.” 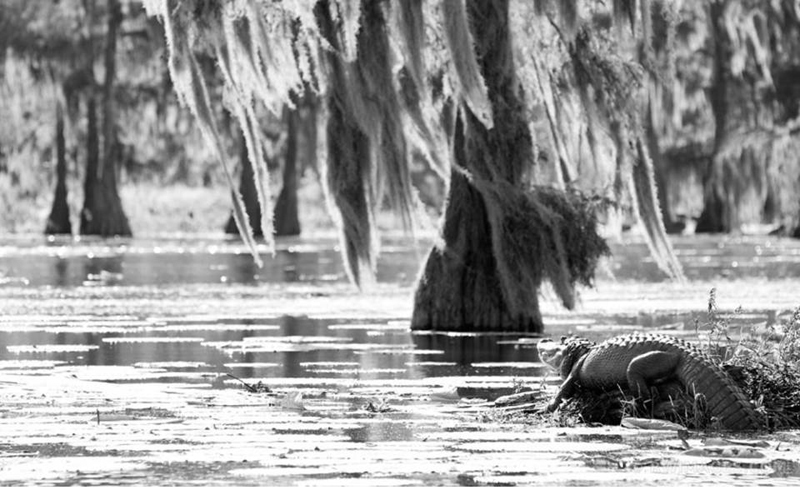 The bodies of Marcello’s enemies are sometimes dissolved in lye and dumped on his 6,500 private estate outside New Orleans called Churchill Farms. The locals call it “Marcello Gumbo.”
Toggle Sliding Bar Area